No longer dismissed as “conspiracy theory nonsense,” Rhode Island’s general assembly is concerned enough that geoengineering, or “intentional manipulation of the 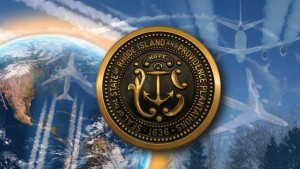 environment,” involves “hazardous activities that can harm human health and safety, the environment, and the economy . . .” that they passed a bill to regulate all geoengineering activities.

(AmericanFreePress) – In late September, Rhode Island became the first state to enact legislation that calls on officials to examine how atmospheric-modification programs, commonly referred to as “geoengineering,” are affecting the Earth. The measure in question is the Geoengineering Act of 2017 (H. 6011), which was introduced by state Rep. Justin Price (R) earlier this year.

Specifically, the bill would “provide that a person seeking to engage in geoengineering activities would require a license from the director of the Department of Environmental Management,” an April 2017 legislative news release explained, adding: “Geoengineering is defined as the intentional manipulation of the environment, involving nuclear, biological, chemical, electromagnetic and/or other physical-agent activities that effect changes to earth’s atmosphere and/or surface.”

Cloud-seeding has long existed as a form of weather modification. One example is the U.S. military’s clandestine Operation Popeye, which illegally applied a “cold cloud modification system” using three WC-130 planes to shoot silver-iodide flares into the skies to induce heavy rains to muddy the Ho Chi Minh Trail. The purpose was to stop or slow North Vietnamese troop convoys.

But there’s a growing recognition that much else is going on above us—and has been for a long time. Many people call those criss-cross vapor streaks that often mar otherwise beautiful blue skies “chemtrails,” a broad term referring to visual evidence of an apparent program involving atmospheric spraying that allegedly goes beyond creating rainfall.

Perhaps the most common claim is that atmospheric aerosols are being sprayed to deflect sunlight and keep the Earth from getting too warm, in keeping with the climate change theory that world temperatures are unnaturally rising, and humanity’s industrial emissions are chiefly to blame.

Specialists interviewed by this AFP writer regarding geoengineering have some weighty concerns, especially regarding the bill’s “regulation” provision.

“There are concerted efforts in America and in Europe,” nuclear physicist and atmospheric researcher J. Marvin Herndon told AFP, “that are aimed at geoengineering ‘governance.’ All of those efforts, to my knowledge, fail to tell the full truth, fail to admit that geoengineering has been taking place covertly for decades.” He continued, “The more I learn of the horrific adverse health consequences for humans and other biota, the more I realize that there is only one acceptable act of governance: The total and complete ban on placing any and all substances into the air we breathe for any reason.”

Herndon did add, “Representative Justin Price deserves major kudos for not burying his head in the sand as most (virtually all) civic leaders do.”

Price’s bill requires advance disclosure of precise geoengineering plans before they’re carried out. Otherwise, geoengineering should be banned, said Price, who told reporters: “I think the public should not take the idea of geoengineering lightly, because we have no idea what irreversible damage could be done to the planet or our atmosphere . . .. Either the entire process is completely transparent to the public, with strict oversight, or I say, it absolutely should not happen.”

This bill, introduced on March 24 and passed by the House Sept. 19 by a 67-0 vote, would “create a five-member commission to study and provide recommendations on the regulation and licensure of geoengineering.”

Yet this issue runs even deeper than many may suspect. Jim Lee of South Carolina, a researcher on geoengineering, especially weather modification, spoke at length on such matters at last December’s Freedom Force International conference entitled “Global Warming: An Inconvenient Lie” in Phoenix, Ariz.

Lee credits Price for waking people up about geoengineering, but there already are broader laws on this subject that have long been on the books—such as the federal Weather Modification Reporting Act of 1976—that should be utilized to bring clandestine atmospheric modification into full public view and establish a means of policing, punishing or banning it.

The Rhode Island bill’s text says that violators would be punished $500,000 per occurrence with “not less than 190 days” in jail, and per occurrence could mean per day.

“With the Rhode Island bill, there’s no way to punish anybody,” Lee countered. “It doesn’t say anything about how you catch somebody [engaging in geoengineering flights] without a license. The 24-hour prior notice in the bill is okay, but we have to deploy atmospheric sensors to catch violators in the act.”

As he understands it, most atmospheric modification programs are “deep-state” and by definition would be hard to thwart under the Rhode Island bill—given the limited jurisdiction and land area of this small eastern state.