As the Islamic State has raged from Syria to Iraq, it threatens to wipe out Christians and other religious groups with singular roots in ancient Mesopotamia 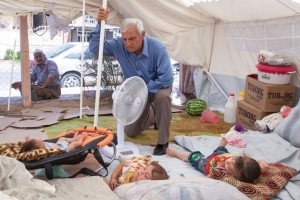 (WNS)–Sami Dagher is waiting in the hot sun for a truck delivering air coolers. It’s 5 p.m. in Erbil on Saturday, Aug. 16, and the temperature hangs stubbornly at 111°F. He needs 500 air coolers—evaporative cooling units that use fans with water and consume less electricity than air conditioners. He can locate only 100 but hopes to have a few hundred more trucked in from Iran tomorrow.

“Here in Ainkawa area of Erbil alone we have 30,000 displaced—all Christians—and the heat is terrible,” said Dagher, pastor of a Christian and Missionary Alliance Church in Beirut and a church planter who has helped start churches across the Middle East.

The Alliance church in Erbil, the capital of Iraq’s Kurdistan region, is working with aid groups to coordinate relief to many made homeless by waves of onslaught across Iraq by ISIS (or ISIL), the Islamic militant group now calling itself the Islamic State. At least one church in Erbil has 140 people sleeping in its halls. Once mattresses arrived, more spilled out to sleep on dirt or grass outside the church buildings.

Along with air coolers, food, clothing, diapers, mattresses, pillows, and blankets—not to mention housing—are all in short supply. Many of the displaced Christians in Erbil are living in tents outdoors and in buildings under construction. They are surviving with no bathrooms, no running water, no finished windows or doorways, and no relief from the heat, said Dagher: “Yes we are getting supplies, but our city is overwhelmed.”

Much of Iraq’s Christian population—halved and halved and halved again since the 2003 U.S. invasion—now finds itself shoved into the Kurdish corner of Iraq with nowhere else to go but cities like Erbil and Duhok, cities isolated from the rest of the country and surrounded by mountains with limited transit routes. War in Syria, hostility in Iran, and a closed border to Turkey all leave the Christians forced from Mosul and Nineveh Plain this summer with next to no options—and so they have crowded into church courtyards, sleeping in streets and parks, living out of tents or on open ground. 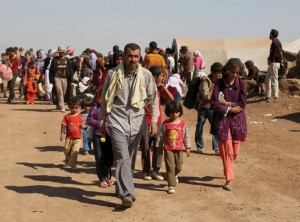 Over 1.5 million Iraqis have been displaced in three waves of ISIS onslaught starting in January in Anbar Province. Most brutal was the third wave Aug. 1-6 across Nineveh Province: It forced out up to 33,000 families, according to the UN, and killed thousands, leading to genocide for Yazidis and other minority populations in Iraq. On Aug. 13 the UN declared Iraq a “Level 3 Emergency,” its highest category for humanitarian crisis.

Despite more recent gains on the ground—made possible by U.S. air strikes in the area starting Aug. 8—ISIS retains a hold on one-third of Iraq. Homeless Christians and others have no idea what will happen to them next, where they might go, or how to make a home that’s secure again.

Aid coordinators like Dagher, who is working with Samaritan’s Purse, emphasize the extreme level of relief needed: water, food, milk and diapers for babies, mattresses, pillows, and blankets. Most families who escaped the ISIS grip in Mosul and surrounding areas lost everything, including their homes and any money they had in the bank. Reports have circled the internet of women whose wedding rings ISIS confiscated, babies whose gold earrings the militants removed.

“We have to take care of them or they will not survive at all,” said Yousif Fahmi, a monk who oversees Mar Mattai, a Syriac Orthodox monastery in Nineveh Province.

A fourth-century enclave set in mountains 12 miles east of Mosul, Mar Mattai is under protection of Kurdish forces now, after for a time this summer becoming a safe haven to dozens of families from Mosul and the villages of Nineveh Plain fleeing the ISIS ultimatum to convert or be killed.

Fahmi left the monastery in the care of Kurdish peshmerga to escort many of the families to the city of Duhok further north—where an additional 20,000-30,000 Christians are estimated to have taken refuge. But necessities are in short supply and some of those families are living on the street, he told me by telephone: “There are babies without milk, boys and girls without food, and a whole family here with only one blanket among them.”

Dagher said the hardest part of the unfolding crisis is the number of young people affected. A third of those living outdoors, he estimates, are young children. “You will see newborns, even 3 days old, who have to be put on the ground. They are crying in the heat, the ants will come and eat on them, and there is really nothing we can do about it.”

Brutality against Christians heated up in June with the ISIS takeover of Mosul, forcing tens of thousands to flee. June 15 marked the first worship day in 1,600 years when no Mass was said in Mosul, according to Chaldean church leaders. ISIS turned churches into mosques, and on July 24 blew up the tombs long ascribed to the Old Testament prophets Jonah and Daniel.

Already ISIS held Syria’s northern province of Raqqa. With gains south of Mosul near Baghdad, it declared an Islamic caliphate stretching from northern Syria to eastern Iraq, and declared itself the Islamic State in late July.

Attacks escalated as ISIS drove out Christians and other minorities from most remaining towns of Nineveh, including Qaraqosh, a city of 50,000, on Aug. 2. The same day Islamic State fighters attacked Sinjar, an area of mostly Yazidis, but also home to Christians, Shabaks, and Turkmen.

About 40,000 residents took refuge along the Sinjar Mountains, where they became cut off from Kurdish protection. Many perished there in the first 24 hours for lack of water. With genocide of the Yazidis a threatening possibility, President Barack Obama authorized air strikes (citing concern for U.S. citizens in the area) and humanitarian aid drops Aug. 7, and they began the next day. Since that time the United States and the European Union reluctantly have taken a larger role in trying to hold together a tattered Iraq.

But atrocities continue. Dozens of Christian families remain unaccounted for who lived in the mostly Yazidi area of Sinjar. More than 70 girls and women from the area “were taken, raped, captured and sold,” reported the Assyrian Aid Society. ISIS executed at least 2,600 mostly Yazidi men who refused to convert to Islam and abducted 500 women, reportedly to Mosul where they could be sold into forced marriages or sex slavery.

Although many Yazidis were escorted by Kurdish militias to safety in Kurdish territory, ISIS militants executed 80 men from the Yazidi village of Kocho Aug. 16 and detained hundreds of women, Kurdish peshmerga commander Ziad Sinjar told The Washington Post.

Yazidis claim to have the world’s oldest religion, one that predates Christianity and Islam. They worship angels, believe in reincarnation, and stick together: Yazidis only marry among themselves and are forbidden to convert others. Experts say about 400,000 live in Iraq—and ISIS put to flight perhaps 300,000. Yazidis also suffered the worst terrorist attack of the Iraq War, when a triple suicide bombing in 2007 killed 500 of them near the town of Shekhan.

With the latest terrorism, experts agree genocide is a real possibility. “We’re talking about a very real, immediate threat that an entire, ethno-national religious group is wiped off the face of the earth,” said David Romano, professor of Middle East politics at Missouri State University. “And we’ve already seen what’s happened to the Christians of Mosul. They’ve been there about 1,800 years, since long before Iraq existed, and since long before Islam came onto the scene. And there’s none left in Mosul.”

For Jews and Christians, exile and mass bloodletting on the hot, brittle plains of Nineveh are a common thread of history. Ancient bas-reliefs depict the Assyrian conquest of Mesopotamia with men in skullcaps, long assumed by archaeologists to be captive Jews. In the sculptures the Jews carry their children with them, along with bowls and skins of water. The women are tearing their hair, throwing dust on their heads, and wailing. Some are bound with iron manacles.

With the arrival of Arab Muslims in 632, pressure to convert to Islam began (similar to Islamic State threat to convert, pay tax under Muslim law, or “have nothing but the sword”). Many Arab Christian tribes did convert, but in Nineveh the Assyrians and Chaldeans for the most part did not. Waves of persecution followed. At the end of the Ottoman Empire in World War I, hundreds of thousands of Assyrian  Christians in what’s now northern Iraq perished along with Armenians.

With the Iraq War, Sunni militants under al-Qaeda again targeted Christians—and an exodus from Baghdad, Mosul, and elsewhere sent between 30,000 to 50,000 north to Nineveh Plain, where they resettled ancient Christian villages. Around 2008 the Kurdish regional government financed the rebuilding of dozens of churches (along with schools and houses) in those villages.

Now many of those resurrected villages are empty again. Even with U.S. air power, ISIS believes it can hold the once-Christian heart of Iraq.

“This is a force that is ideologically motivated, battle hardened and incredibly well equipped,” said Douglas Ollivant of the New America Foundation, who served the Obama and Bush administrations on Iraq. “It also runs the equivalent of a state. It has all the trappings of a state, just not an internationally recognized one.”

Iraq’s Christians have a long history of learning what to do under an oppressive state: They continue to worship, to help one another, and to pray. Many have told me they have new appreciation for Kurdish protection, despite tensions in managing the crisis. Dagher told me worship services are overflowing in Erbil, and he preached on Aug. 17 for the fifth time since his arrival. “The Holy Spirit is doing wonderful work among the people here,” he said. “Refugees are standing in church and repenting of their sins and confessing. Even when they have lost everything, they are joyful in finding and trusting Christ.”