Russia banned from 2018 Olympics in South Korea amid doping scandal

By Chris Pleasance and Scott Campbell 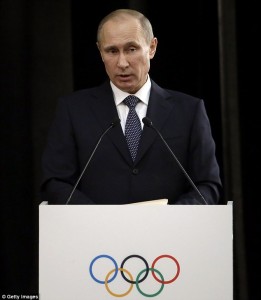 This is the moment Russia‘s would-be Winter Olympians learned they would not be competing in next year’s event. Some walked from the room in disgust as the International Olympics Committee issued a blanket ban to the team, while others sat with their heads in their hands.

The pictures emerged as President Putin hit out at the ban, describing it as ‘staged and politically motivated.’ Speaking to automobile plant workers in Nizhny Novgorod, where he announced plans to run for a fourth term, he continued to deny the existence of any state-sponsored doping program. Putin also gave his blessing for athletes to compete as neutrals, having earlier raised the prospect of a complete boycott.

Konstantin Kosachev, chairman of the foreign affairs committee at the Russian parliament’s upper house, also said the ruling is ‘clearly part of the West’s policy to restrain Russia’. His spokesman Mr Peskov had earlier told a gathering of reporters that ‘we need to put emotions aside’ and ‘make a serious analysis ‘before taking any steps.

He also said Russia ‘still needs to answer some questions’ from the IOC. Asked if the Russian officials who have been barred from attending the Olympics would be penalized or sacked, Mr Peskov insisted that is not a priority and that ‘protecting the interests of our athletes’ is more important.

Russia also announced on Wednesday that 22 athletes banned for life after the Sochi Winter Olympics, where the doping scandal was exposed, will be appealing the ban. It said the athletes had asked CAS to rule before the start of the Pyeongchang Olympics in South Korea, on February 9.

Russian state television has already said it will not broadcast the games in protest at the ban, while Putin has raised the prospect of boycotting the games entirely.

As well as the immediate suspension, the IOC announced a raft of sanctions against senior officials implicated in the scandal, including Russia’s deputy prime minister Vitaly Mutko. It has also fined the ROC 15 million US dollars to reimburse the costs of the various investigations into Russia’s cheating and help set up the IOC’s new independent testing authority.

The ban is set to cause a major impact on 2018’s competition in Pyeongchang, South Korea – particularly in disciplines like figure skating, cross-country skiing, speed skating and bobsledding.

Russia’s systemic doping was brought to the world’s attention over the last three years by whistleblowers working on the inside, most notably the ex-director of the Moscow anti-doping laboratory Dr Grigory Rodchenkov. Having fled to the United States in November 2015, Rodchenkov is now in witness protection and has been cooperating with investigations led by the IOC.

Before Tuesday’s decision, his lawyer Jim Walden said he believed ‘too much evidence has come out’ for the IOC to impose the sanction many thought was most likely earlier this year, a large fine. Walden added: ‘If they were to do that, it would be incredibly unwise and only embolden the cheats.

‘What looks most likely now is that Russia will be prevented from competing officially in Pyeongchang. ‘So no anthem, no flag. But athletes not implicated will be allowed to prove themselves clean so they can compete as individuals.’

The investigation said the cheating peaked at the 2014 Winter Olympics in the Black Sea resort of Sochi. During the games, Russian secret agents are said to have engineered an elaborate system of state-backed doping.

Speaking on Tuesday, the author of the IOC investigation report told journalists that he had found ‘systemic manipulation’ by Russia.

Samuel Schmid told journalists: ‘The results are not based only on (whistleblower) Grigoory Rodchenkov’s testimony. ‘There is scientific evidence, witness statements documents and correspondence. ‘The facts are that in Russia there was systemic manipulation of doping and the anti-doping system that also took place at Sochi 2014.’ 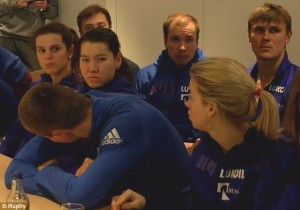 In the past week a raft of bans have been handed out to the country’s 2014 medallists. In total the country was stripped of 11 of its 33 medals meaning it has lost its position at the top of the Sochi table to Norway – slipping to fourth place.

In October, Russian President Vladimir Putin accused the United States of putting indirect pressure on the IOC to block Russia from the Games in South Korea. He warned if the IOC left Russia out in the cold, it would cause ‘serious harm to the Olympic movement’.

Putin said: ‘There are two options. Either forcing Russia to compete under a neutral flag or not letting it go to the Olympics at all. Either one is humiliation for the country.’

Nations have in the past been barred from taking part in the Olympics, notably South Africa during the apartheid years, but none has ever been handed a blanket ban over doping.