By Kim Smith
It turns out there may be some truth to the Russia collusion story, but it happened on former President Barack Obama’s watch, and it has former Secretary of State Hillary Clinton’s fingerprints all over it.

According to a recent report in The Hill, a controversial Obama administration decision in 2010 to approve a deal that gave a Russian company control of 20 percent of the United States’ uranium supply came through, despite an FBI investigation at the time that showed “substantial evidence that Russian nuclear industry officials were engaged in bribery, kickbacks, extortion and money laundering designed to grow Vladimir Putin’s atomic energy business inside the United States.” 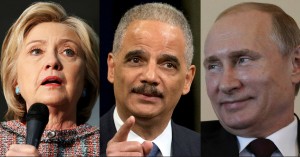 A confidential U.S. witness working inside the Russian nuclear industry made secret recordings and amassed emails going back as early as 2009 that showed Moscow bribed an American uranium trucking firm with kickbacks, violating the Foreign Corrupt Practices Act, according to The Hill.

This goes back to 2010, when then-Secretary of State Clinton, along with then-Attorney General Eric Holder, joined the Committee on Foreign Investment that approved the purchase of the Canadian mining company Uranium One to the Russian firm of Rosatom.

The deal would give the Russian state-owned Rosatom control over a large amount of American uranium.

Federal agents gathered evidence that included recordings and emails that go back as early as 2009 showing Moscow bribed the trucking firm. The Obama Justice Department dragged its feet and investigated the matter for years rather than bring swift justice.

While this was taking place, the administration made two decisions benefiting Moscow. The first was the approval of a partial sale of Uranium One to Rosatom. In 2011, the administration approved a separate deal involving Rosatom subsidiary Tenex, which allowed it to sell commercial uranium to U.S. nuclear power plants in a partnership with the United States Enrichment Corp.

The Department of Justice apparently knew about the FBI’s bribery investigation in 2010, but did not bring charges in the case, leaving Congress and the American public in the dark about the corruption taking place. The racketeering scheme was conducted “with the consent of higher level officials” in Russia who “shared the proceeds” from the kickbacks, an affidavit revealed, according to The Hill.

“The Russians were compromising American contractors in the nuclear industry with kickbacks and extortion threats, all of which raised legitimate national security concerns. And none of that evidence got aired before the Obama administration made those decisions,” a person who worked on the case told The Hill.

In December 2015, federal agents went after Russian nuclear industry official Vadim Mikron, who was sentenced to 48 months in prison and ordered to forfeit more than $2.1 million for his role in the scheme.

And that was apparently the end of it. Until now. One thing is certain — someone needs to answer for this.