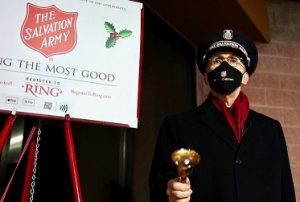 By Mark A. Kellner – The Washington Times

The Salvation Army said Monday it has withdrawn a discussion guide on racism that was intended for its church members but that an advocacy group claimed was given to donors as a call to “repent” for being White.

“If that document is getting in the way of the fulfillment of our mission, The Salvation Army is going to remove it,” Commissioner Kenneth Hodder, the group’s U.S. national commander, told The Washington Times. “Because nothing can be allowed to affect the fulfillment of that critical mission.”

The church group has been flooded by email complaints about repentance requests over its guide “Let’s Talk About Racism,” one critic said. An online petition has garnered more than 14,000 signatures asking the organization to denounce critical race theory.

Commissioner Hodder said that funds needed to meet “an enormous increase in human need” are under threat from “unfounded” allegations. “When the Salvation Army is subjected to sensationalist claims, such as have appeared recently, it causes confusion in the minds of many who would otherwise give,” he said in a telephone interview. “And that will have a direct effect upon our ability to meet all the needs that we anticipate meeting this year.”

Known for its 130-year-old Red Kettle Campaign, The Salvation Army hopes to raise $175 million this year on street corners, at shopping malls and outside of stores and supermarkets. In its 2020 fiscal year, the charity raised $557 million during the holiday season, or 23.5% of the $2.3 billion the public donated that year.

The contention began with the publication earlier this year of the discussion guide, which the evangelical Christian church created in response to protests against racial injustice in 2020.

Along with an extensive discussion of systemic and structural racism, the document included a conversation guide highlighting “the necessity of lament and repentance in the believer’s journey towards racial equity and racial reconciliation.” The Times obtained a copy of the document before it was taken offline.

“[A]s we engage in conversations about race and racism, we must keep in mind that sincere repentance and apologies are necessary if we want to move towards racial reconciliation. … Perhaps you don’t feel as if you personally have done anything wrong, but you can spend time repenting on behalf of the Church and asking for God to open hearts and minds to the issue of racism,” the document states.

Kenny Xu, president of Color Us United, which he described as a “small organization” dedicated to fighting critical race theory, organized the online petition calling on The Salvation Army to “revoke” the document and “denounce” CRT, which he claimed underlies the document. Mr. Xu said his group hopes to collect 25,000 signatures and are more than halfway there.

Caption: Salvation Army National Commander Commissioner Kenneth Hodder, in face mask, stands at one of the groups Red Kettle Campaign outposts to kick off the 2021 effort.