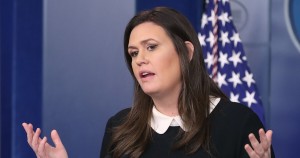 In case you hadn’t noticed (and there really wasn’t any reason for you to) our federal government is very partially shut down due to a fight over border wall funding. While this affects some federal employees, the vast majority of Americans won’t feel any pinch at all due to the fact that the Republicans and Democrats have a slight disagreement over border security. (Namely, Republicans think the border should be secure, and the Democrats like votes.)

Sanders was appearing on “Fox & Friends” Friday morning to discuss the shutdown showdown and border security, calling it “a sad day in America.” It wasn’t because the government was partially shutting down, mind you, or that the wall wasn’t being built.

Instead, she noted that Mexico — the country we think of as representing the putative problem in this mess — is actually doing more than Democrats to keep our border safe. “We will do whatever we need to do and whatever we can do to help the process. At this point, it’s up to the Senate,” Sanders told Fox News.

“One thing that I think has been missed and didn’t get a lot of coverage yesterday was what we have worked out, what this administration has been able to do in conjunction with the Mexican government and the massive and monumental moment that took place yesterday where catch-and-release has ended.”

Catch-and-release is the colloquial name for allowing immigrants who claim asylum to be released in the United States as they await adjudication on their claim. This is problematic for a number of reasons, in particular that most asylum claims are denied and many of the immigrants use the opportunity to abscond.

The long-gestating deal was announced Thursday at a House Judiciary Committee meeting, where Department of Homeland Security Secretary Kirstjen Nielsen told Congress that asylum-seekers would now remain in Mexico while their cases were being processed, according to Fox News.

Nielsen noted that “by the time the courts have issued their orders, most of these illegal aliens have vanished within our country for good.” “They have escaped the law, undermined the system, and made it harder for us to actually help real asylum-seekers by flooding the system with false claims.”

And that, to Sanders, raised an interesting point. “It’s a sad day in America when the Mexican government is doing more to protect the American people than Senate Democrats,” she said. “I hope they will not let that be the case and they will work with us and work with the president and Senate Republicans to get this done and let everybody go home and let us start building the wall and let us start protecting our border.”

That seems unlikely. While the House has passed a bill with funding, Senate Democrats have made it clear they’ll filibuster it until the rapture if need be.

Apparently, they’re more than willing to let Mexico take the lead on border security — although one guesses they would also be perfectly happy if neither occurred.