Saudi Arabia: Assad ‘Will Be Removed by Force’ If Syria Peace Talks Fail

If you are ever looking to start a world war, Saudi Arabia will be happy to help you out. Saudi Arabia has broken practically every rule in international law with its most recent statements on Syria’s civil war.

Saudi Arabia’s Foreign Minister Adel al-Jubeir said: “Bashar al-Assad will leave – have no doubt about it,…

He will either leave by a political process or he will be removed by force. We will push as much as we can to ensure that the political process works. But if that doesn’t work, it will be because of the obstinance of the Syrian regime and that of its allies, …And should that prove to be the case, then it becomes clear that there is no option to remove Bashar al-Assad except by force.”

Many would argue that while certainly not an angel, Assad is far from the problem in Syria. Instead, they might argue that armies of Western trained and supported terrorists pumped into the country are the cause of the widespread violence and chaos.

In what is a very daring move for Saudi Arabia, the Foreign Minister appears to even directly threaten Russia by claiming that Syria’s ‘allies’ are also responsible if the peace process fails. 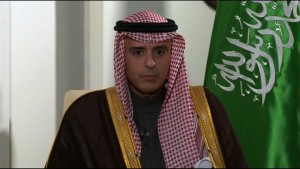 Mark Sleboda, an international affairs and security analyst, says that: “The very threat to use force against another state is considered a capital crime of aggression and violation of the UN Charter and International Law.”

The momentousness of this threat from Saudi Arabia cannot be understated, as all of the pieces are now in place for a major international war to occur. Russia has firmly, and legally, sided with Assad’s sovereign government, which automatically adds a nuclear power into the mix.

Turkey is essentially working with ISIS to achieve its own ends, and the Saudi’s, the central U.S. ally in the region, have just moved fighter jets and troops to a base in Turkey ready to invade where they will come face-to-face with the Russians.

Why then should we believe that, as we just heard above, the Saudis want to “push as much as we can to ensure that the political process works”?

Turkey is also a member of NATO, and could conceivably try to invoke its defensive principles to pull the rest of NATO into the fray.

Saudi Arabia would be wise to remember that in international affairs, what goes around, comes around. Who knows how Russia would react to an attempt to remove, ‘by force’, their key ally in the region.

Medvedev himself has just warned that this situation could lead to World War III, and the Russians are unlikely to want to squander all of their progress in the theatre by letting Turkey and the Saudis have their way.