Their descriptions suggest many babies are born alive and then killed, a violation of the federal Born Alive Infant Protection Act signed into law in 2002. One witness also describes seeing a baby whose heart was still beating after the abortion and recalls watching an abortionist cut through a dead baby’s face to obtain his brain. 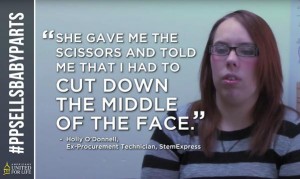 Deborah Nucatola, senior director of medical services for Planned Parenthood Federation of America, returns in this latest video, talking about how some of her workdays begin with figuring out what baby parts are most needed by the labs Planned Parenthood partners with.

“It’s worth having a huddle at the beginning of the day, and that’s what I do,” Nucatola says during what appears to be the same conversation shown in CMP’s first undercover video.

Planned Parenthood’s game plan evidently involves maneuvers to procure an intact aborted baby in order to obtain the baby’s brain. But the brain is the most difficult organ to collect in a condition that preserves its value for later experimentation.

“They want both hemispheres intact with the brain stem, which usually doesn’t happen,” says Holly O’Donnell, a former procurement technician for tissue company StemExpress who appeared in several other CMP videos. For the researchers buying the fetal tissue, even a brain 70 or 80 percent intact might not be acceptable, she says.

In the new video, after putting down a glass of wine and picking up a salad fork, Nucatola says most of the other organs come out intact. But saving the brain presents a challenge. She suggests Planned Parenthood does its best to make sure the brain can be extracted with the least damage possible.

To do this, “under ultrasound guidance, they can just change the presentation” of the baby so that the baby is delivered feet first, Nucatola explains. When the baby comes out head first, there’s never enough dilation, she says. So, if the abortionist can “dilate from the breech [feet-first] position, it increases the dilation, permitting an intact calvarium [head] at the end” of the abortion procedure.

Nucatola recognizes that if abortionists “induce a demise before the procedure, nobody’s going to say you did a … live, whatever the federal government calls it, partial birth abortion.” But she implies, and an Advanced BioScience Resources procurement manager seems to confirm, Planned Parenthood sometimes does not kill the baby with digoxin—which will damage the baby’s organs—but delivers the baby alive in the breech position.

And sometimes the baby’s heart is still beating.

O’Donnell describes an instance when the doctor called her in to show her an aborted baby’s beating heart, a post-abortion occurrence that’s not uncommon, according to Ben Van Handel, executive director of Novogenix Laboratories.

“There are times when after the procedure is done that the heart is still beating,” Van Handel confirms during a secretly recorded phone call with an undercover actor posing as a tissue buyer.

The new CMP video includes a clip provided by the Center for Bio-Ethical Reform, in which an aborted baby boy is still moving around in a steel pan.

“We alter our process, and we are able to obtain intact fetal cadavers,” she says. Then the baby is chopped up and his or her parts inventoried. “Splitting the specimens into different shipments. … I mean, it’s all just a matter of line items,” Farrell says.

Splitting the “specimen,” in order to extract the brain, requires cutting the baby’s face open from the chin upwards. In the video, O’Donnell describes the procedure she claims made her realize, “I couldn’t work for the company anymore.”

The abortionist, O’Donnell recounts, aborted a baby sufficiently “intact—we can really procure a lot from it. We’re going to procure the brain.” The doctor made a vertical cut in the chin up to the mouth and then handed the scissors to O’Donnell and “told me to cut down the middle of the face.”