“And thy heaven that is over thy head shall be brass, and the earth that is under thee shall be iron.” Deuteronomy 28:23

The Regional Council of the Jordan Valley published its annual report with the disturbing finding that the salinity of the Kinneret (Sea of Galilee) is 30 percent higher than it was just five years ago and the highest it has been in 50 years. This dire situation may be remedied by prayers and good acts, and is described in Jewish sources as an aspect of the pre-Messianic age. 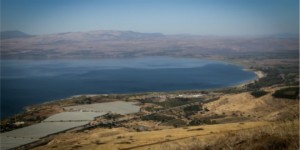 Kinneret in summer (Photo by Flash 90)

The salinity of the large lake has been rising due to the inflow of saline springs located on its shore and offshore springs at the bottom of the lake. This is normally offset by precipitation, which has been seriously under-average for several years. In February of 2017, only ten percent of the average monthly norm of precipitation fell, and at the end of the winter rainy season, the level of the lake was still below the red line. This lack of rain has been especially apparent in the North of Israel, from where the rainwaters flow down into the Kinneret.

The Kinneret is Israel’s most important surface water resource, providing approximately 35 percent of the country’s drinking water. The rises in salinity has led to a decrease in the lake’s fish populations and an increase in the price of water for agricultural purposes.

These matters are essential to farmers in Israel, but rain and the state of the Sea of Galilee are also relevant to the spiritually-minded. Water and rain in Israel are described in the Bible as being a result of prayer and performing mitzvoth (Torah commandments), as warned in the Book of Deuteronomy.

Hashem will make the rain of thy land powder and dust; from heaven shall it come down upon thee, until thou be destroyed. Deuteronomy 28:24

In the Bible, there are several cases of droughts ending after righteous prayer, such as the Prophet Elijah.

And it came to pass in a little while, that the heaven grew black with clouds and wind, and there was a great rain. And Ahab rode, and went to Jezreel. I Kings 18:45

The Zohar, the foundational work in Jewish esoteric learning, states that this pre-Messiah desolation will first become apparent in the Galilee region, presaging the arrival of the Messiah.