LANCASTER, Pa. Sight & Sound Theatres®drawing 1.4 million people this year to its epic biblical dramas on stage in Lancaster PA, and Branson MO, has announced a new, streamlined leadership structure, positioning it to more efficiently and effectively expand its mission.

Sight & Sound® takes theater to a whole new level. Every show is an epic experience with a meaningful message. Edge-of-your-seat action meets heartfelt drama on a panoramic stage. Theater goers are surrounded with uplifting Bible stories brought to life by an exceptional cast, spectacular special effects, massive sets and live animals—on stage and in the aisles. 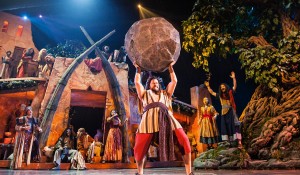 “This realignment creates more leadership capacity for Sight & Sound and allows us to move into the future with greater clarity, creativity and agility,” CEO Matt Neff said. “We are positioning ourselves to explore what might exist for Sight & Sound beyond our live shows—evaluating new entertainment platforms that enable us to reach a larger audience.”

Besides the live shows of Jonah in Lancaster, and Moses in Branson, one Sight & Sound production will show in 600 movie theaters nationwide in Spring 2017. With several consecutive record-breaking years, big demand for biblical entertainment is evident–just as 2016 was Sight & Sound’s best year in its 40 years of business. In both Lancaster and Branson theaters, more than 85 percent of all seats available were filled.

“We’re reaching capacity goals much faster than anticipated,” Neff said. “We think about how we can continue to reach more people, even if they can’t fit in our theaters.”

“This shift focuses our talented leadership team more squarely on our vision to bring the Bible to life for a wide audience,” Enck said. “The entire Sight & Sound family is excited about what this means for our future.” 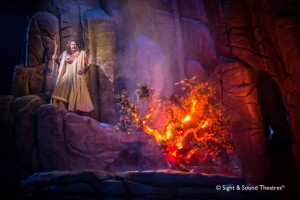 Each production features 40-plus cast members, live animals on stage (and in the aisles), massive sets and spectacular special effects on a panoramic, 300-foot stage that wraps around the audience on three sides.