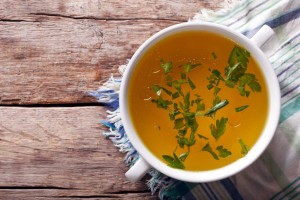 Tasty meat broth with parsley in a white bowl closeup. horizontal view from above

The top food for wound healing is soup, not readymade supermarket canned or packaged soups, but old-fashioned homemade bone broth.

A South American proverb claims “Good broth will resurrect the dead.” Although that is surely an exaggeration, soup has a longstanding reputation for nourishing convalescents.

Broth boosts immunity so well that it’s been nicknamed the “Jewish Penicillin.” Florence Nightingale recommended it in her Notes on Nursing and she even brought celebrity chef Alexis Soyer to the Crimean War to make broth for the wounded soldiers.

Why is broth such a powerful healer? Fascinating studies from the late 19th and early 20th century reveal that gelatin — the part of broth that firms up and gets jiggly in the fridge — helps heal any body parts that are failing to thrive, suffering from wounds or recovering from surgery.

The collagen in broth heals skin, including our gut linings, while the cartilage that come with the bones in genuine bone broth help joints recover.

Another reason broth is so healing is it contains an abundance of the amino acid glycine. Glycine is not officially called a “conditionally essential” amino acid, but it truly deserves that status. As the simplest amino acid, it constitutes a basic nitrogen pool for manufacture of other amino acids, and it is used in the synthesis of hemoglobin, creatine, porphyrin, bile salts, glutathione and the nucleotides DNA and RNA.

Individuals with compromised glycine status have difficulty satisfying the increased demands of injury or surgery. Another vital function of glycine is detoxification. Glycine is a precursor for glutathione, greatly needed when the human body has been exposed to chemicals or drugs.

Read the full article at DrKaaylaDaniel.com.