By The New Observer staff

Black criminal gangs have killed one white South African farmer every five days so far this year, according to new figures released by the AgriSA agricultural union in Pretoria.

In a statement issued by Ian Cameron, AfriForum’s Head of Safety, it was revealed that there had been 109 farm attacks in less than 100 days of 2018. During these attacks, 15 farm murders had taken place.

“Our rural areas are trapped in a crime war,” Cameron said. “Although the South African government denies that a violence crisis is staring rural areas in the face, the numbers prove that excessive violence plague these areas.”

Cameron added that torturing with irons, blow-torches, melted plastic and boiling water often continues for hours during these attacks

He also said that there had been a significant increase in these types of attacks in the Northern and Western Cape.

“Government cannot deny the facts – our people are being mowed down,” Cameron concluded. 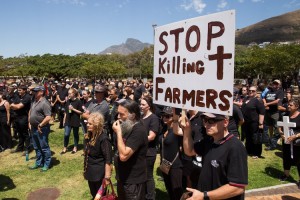 Meanwhile, a straw poll conducted by the Afrikaans online news service Nuus24—which serves the Afrikaans-speaking community in South Africa—revealed that over 85 percent of whites would leave the country immediately if the opportunity presented itself.

The poll, created in the wake of last week’s announcement by Australian Home Affairs minister Peter Dutton that that country was considering giving white South African famers access to refugee visas, offered its participants three reactions to the Australian offer from which to choose:

That’s wonderful news! Where can I hand in my name to emigrate to Australia?

I am uncomfortable with this. Should Australia rather not negotiate with our government before making such an announcement?

I do not understand at all why anyone would want to emigrate to Australia. We live in the land of milk and honey.

Some of the comments to the poll—here translated from Afrikaans, provide an insight into what is quite commonly felt amongst whites in South Africa:

JJ Lovelock: “We are sick and tired of this country with its corruption, hijackings, rapes, and murders. I would love to go to Australia and take my two farmer children with me.”

C L: “South Africa is a failed country which is steadily collapsing. The ANC regime’s naked racism, the EFF and other extremist groups offer nothing good for the future of whites, who cannot get work, whose property will soon be seized without compensation, and institutions s such as [South African Airways] SAA, telephone services provider] Telkom, [electricity services provider] Eskom, [railway services provider] Spoornet, and most municipalities are all bankrupt. Crime is flourishing, education is going backwards, the [South African Police] SAPD is corrupt, and personal security is non-existent—what is still here that would encourage me to stay?”