Doctors’ house calls are considered a thing of the past, but not in the appointment book of Dr. Carrol Frazier Landrum, an 88-year-old physician from Edwards, Mississippi. The good doctor will see you no matter who you are, where you are, or how much money you have — as long his 2007 Toyota Camry can deliver him to your location. But now his state’s medical board wants to see him gone. 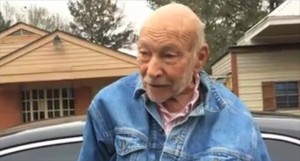 Dr. Landrum, a WWII veteran, was forced to make a change after crime drove him from his Edwards, Mississippi, office two years ago, and he couldn’t find another space suited to his practice. “I had my car, and I realized I could do most everything out of it that I needed to be doing,” said Landrum, according to the Clarion-Ledger. The paper continued, and “for many in [sic] the town of Edwards’ 1,034 residents and others in the metro area, that car has become a lifeline — it’s the makeshift office of the 88-year-old Dr. Landrum, who is the only practicing physician in the town.”

And many of the doctor’s trips take him beyond the town. The octogenarian — in practice for 55 years — sometimes drives 50 miles to meet people in their homes, in a parking lot, or by the roadside. It’s a vital service in Mississippi, the nation’s poorest state, where rural transportation is limited and an emergency room visit can spell financial disaster.

What motivates Landrum to keep this rigorous schedule at an age when most men are long retired? The Washington Post reported on January 14:

“I’ve always had a heart for the poor,” Landrum told The Washington Post this week, struggling to hold back tears. “I grew up poor, and when the doctor would come to us, and he was happy to see us, I pictured myself doing that some day. I try not to ever turn people away — money or no money — because that’s where the need is.”

Unfortunately, government authorities don’t seem have much of a heart for Landrum or the poor. The Mississippi State Board of Medical Licensure has asked Dr. Landrum “to surrender his medical license, which he’s carried in his pocket with pride since Dwight D. Eisenhower was president,” writes the Post.

Landrum, however, has refused to do so. While he was deemed “incompetent” at a recent board hearing, “He said the charge is a catchall,” reports the Post, “one designed to avoid citing a specific occupational violation.” He also made some good points in his own defense: “‘If you’re going down a highway and somebody is hurt in a car accident, you stop and attend to them,’ he told The Post. ‘And if you’re in a shopping center and somebody is having a heart attack, you stop and help. It’s your duty as a physician, and this is no different.’”

We might also note that it was once common for physicians to make house calls with their cars.

Not surprisingly, Dr. Landrum has backers and boosters far and wide; in fact, a petition supporting him now exceeds 31,000 signatures. KSLA 12 News quotes a few of these backers: 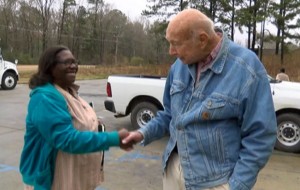 “Dr. Landrum was my doctor when I was like seven years old,” Ruth Daniels tells us. “He has taken care of all my nine sisters and brothers.”

… One Edwards resident says, “He’s been here for over fifty years, almost sixty and we really need him here.”

Then there is Margie Williams Divinity, a former registered nurse who has worked with Landrum. She wrote a letter to the Mississippi State Board of Medical Licensure that reads, in part, as presented by Chattanoogan.com’s Roy Exum:

“I beg the state board of medicine to allow Dr. Landrum to continue practicing medicine. He is one of the smartest physicians still practicing. His knowledge base is vast. His diagnosis [sic] are always on point and he refers patients and always follow up with his patients. He cares about people, about treating them.

“He doesn’t care about all of the billing insurances and Medicare and all of the politics associated with medicine. He just wants to help people. He is still very sharp mentally at 88 probably because he did not let all of this political monopoly on healthcare stress him out by not continuing to partake. He is 88 (years old.) Let him do what he enjoys and at the same time continue to serve his community.”

Exum then followed up with, “H. Vann Craig, the executive director of the state Medical Examiners, said simply, ‘The mission of the Mississippi State Board of Medical Licensure is to protect the public.’”

For sure. And some critics may now be reminded of Ronald Reagan’s famous observation, “The nine most terrifying words in the English language are: I’m from the government and I’m here to help.”

Unfortunately, the Landrum case is just another example of how big government is killing charity, making it increasingly difficult to administer it — and sometimes even punishing those who do so. For another example, consider Michigan mom Lisa Snyder, who would help three neighbors by babysitting their children for an hour before the school bus’s arrival. She was labeled an unlicensed daycare provider in 2009 after the Michigan Department of Human Services learned of her charity and cited a law prohibiting residents from caring for unrelated children for more than four weeks annually. Then, as I wrote in 2009:

But while government officials were ultimately sympathetic to Snyder, the same was not true in the case Oregon man Ben Bond, arrested just last month. His offense?

He fed other people’s parking meters.

And to see what may lie ahead, we need look no further than rather un-jolly old England’s attitude toward good Samaritans. It was on full display with Steve Kink, a businessman who detained a thug he found vandalizing a store and for his trouble was dragged through the courts for five months. Then there was train passenger Tom Wrigglesworth, who was taking up a collection for a weeping, 75-year-old widow who had boarded the wrong train and been ordered to buy a £115 ticket. He was told that he’d be arrested if he didn’t cease and desist.

Critics might note that many of these instances reflect a Pharisaic mentality, referencing the biblical religious leaders (the Pharisees) who took exception to the helping of a sick man on the Sabbath. They were, of course, famously corrected by Jesus, who chastised them for understanding the letter of the law but not its spirit and said, “The sabbath was made for man, and not man for the sabbath.” Likewise, though, are we not behaving today as if man was made for the law, and not the law for man?

As for Landrum, his problems may be remedied by the very charitable spirit so assailed today. KSLA News 12 tells us, “A local contractor says once he completes a building he is working on, it will be turned into Dr. Landrum’s new office.” The attack on charity itself, however, will require stronger medicine. It won’t end until we accept that there’s a higher law than man’s — until we once again allow the moral to precede the legal in our minds and hearts.