Steph Curry Reveals What Inspires Him to Play Basketball. It’s Not What You Think 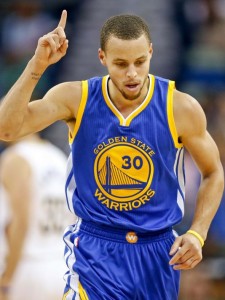 (CP) – Steph Curry has made NBA history with 400 three-pointers, but he didn’t break shooting records just for the fame and accolades.

“I have certain guys who I looked up to. Jordan, Kobe, those guys. Passing that on to doing my part to kind of keep that influence of basketball where it should be is kind of why I play the game,” the Golden State Warriors point guard said in a USA Today report. “For the youth that are watching today’s game and where it is, that would be something very special, in 15 or 20 years, (to) hear stories of kids growing up watching me play and being inspired by what I do on the floor, and how I play the game and what not.”

While no other player in history of the NBA has managed to make 300 three pointers in a single season, the 28-year-old Christian athlete broke his own record of 286 last season to make 400 threes. According to ESPN, Curry averaged five three-pointers while his Warriors set a record previously held by the 1995-1996 Chicago Bulls by achieving 73 wins.

Despite Curry’s accomplishments, he was once looked over as an elite athlete. Last year, the 2014-2015 season MVP read a 2009 draft report that called his skills sub standard.

“Stephen’s explosiveness and athleticism are below standard. He is not a great finisher around the basket,” Curry read from the report in a video promoting the CoachUp website where athletes can improve their skills. “He will have limited success at the next level. Do not rely on him to run your team.”

The star NBA point guard has proven his naysayers wrong, and has credited his faith for much of his success.

Last year, he took time out to reflect on his Christian faith when speaking to sports apparel brand, Active Faith. According to the Christian athlete, his relationship with Jesus started around middle school.

“My parents had us in church every Sunday, every Wednesday. It was more of a tradition at that point; I didn’t have a personal relationship with the Lord until I went to the altar call one Sunday and the youth pastor told us to make a decision for ourselves,” Curry told Active Faith. “The youth pastor told us we had to make a decision for ourselves, we couldn’t rely on our parents. It had to be a decision on our own, and that’s when I made it.”

Curry went on to explain why he takes pride in his Christian faith. “There are so many things we have to overcome in this life with Jesus, His work on the cross, He’s paid the ultimate price for us, so I’m proud to be a child of God,” Curry told Active Faith.