Exodus 35:35 Them hath he filled with wisdom of heart, to work all manner of work, of the engraver, and of the cunning workman, and of the embroiderer, in blue, and in purple, in scarlet, and in fine linen, and of the weaver, even of them that do any work, and of those that devise cunning work. 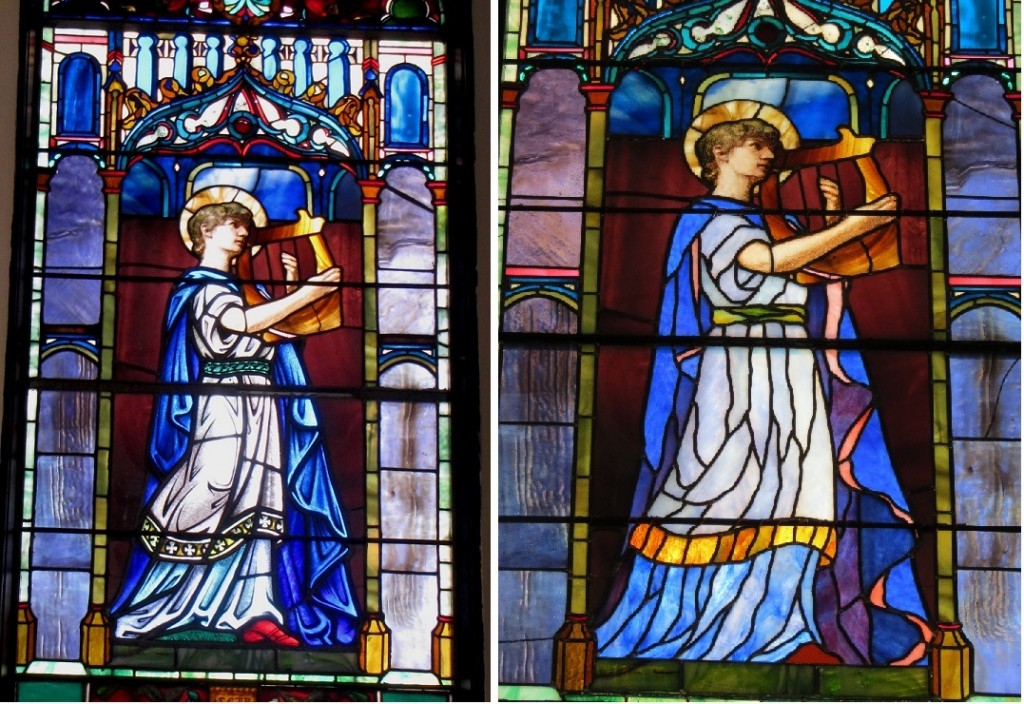 John La Farge Window – Before & After

During a recent interview with Bob Egan, co-owner of Egan Church Furnishings and Restorations, conducted while standing in the gently curved chancel of the lovely 70 foot high sanctuary at St. Lukes’ Episcopal Church in East Greenwich, RI, Bob pointed out an exquisite John La Farge window. It is one of the chancel’s six large, bright, stained glass windows which Bovard Stained Glass Studio, his company’s exclusive vendor, had just finished cleaning and restoring. In 1967, the beautiful John La Farge window, which depicts St. Cecilia playing her harp, and is the most valuable of the six, was the target of vandals who threw a candlestick through it. The company originally hired for repairs simply painted over clear glass when replacing the damaged area. Fortunately, “before” and “after” pictures taken at the time revealed the extent of the poor job and now, 49 years later, professional corrections have finally been made by Bovard’s talented craftspeople. Finding a picture of another very similar scene done by John La Farge enabled them to faithfully reproduce the missing details on the distinctive window. This window was made using two 1/4” layers of glass, while most stained glass windows have only one layer, except for certain designs by Tiffany, which have three.

Bob explained that besides the John La Farge window in the chancel, it is thought that the first three windows on the front right side of St. Luke’s sanctuary may also have been crafted by John La Farge. Also, on the front left side of the church is a stunning three-panel landscape by Louis Comfort Tiffany, the artist who used three layers of glass to achieve unique special effects. All four walls – virtually the entire sanctuary at St. Luke’s Episcopal Church — are adorned with stained glass windows. Along the upper edges of both long side walls, just below the ceiling, are eight groups of six comparatively smaller matching stained glass windows in the shape of arches (a total of 96!) in addition to the 15 large stained glass windows on each long side of the church, and the 7 stained glass windows across the back of the church. Memorial plaques mounted beneath some of the side windows cite several prominent New England family names such as Tillinghast, Browning, Petty, Hunter, De Wolf, and Chafee. 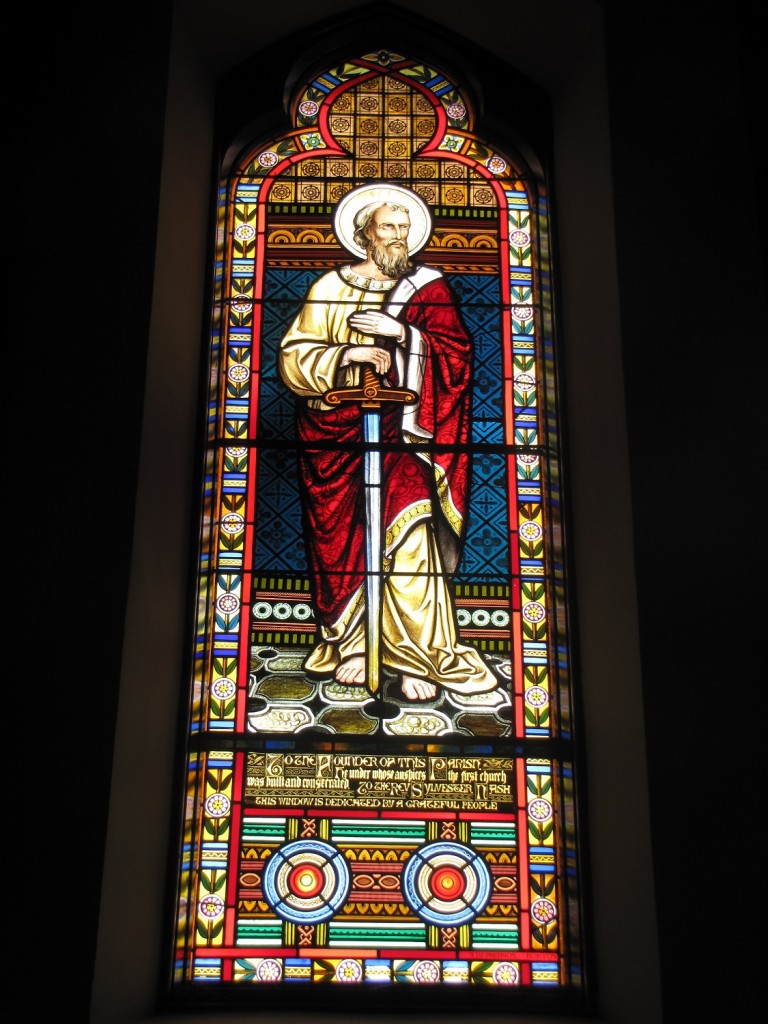 Especially on a sunny day, entering a church having multiple stained glass windows such as St. Luke’s can be an unusually uplifting experience. Light passes through the vibrant, rich colors of glass, bathing the church in hues of green, red, yellow, and blue, as Bible scenes depicted on the windows provide radiant reminders that this is a sacred place well suited to meditation and worship. One soon loses the cares of the day, and assumes a certain serenity born of allowing the beauty of the surroundings to turn one’s eyes upward and one’s heart to the Lord. (Adding to the surreal atmosphere that day was the musical artistry of a man introducing himself as the “substitute” organist who was practicing gorgeous classical pieces for the next service.) Although the purpose of most windows is to allow a view of the outside while admitting light, stained glass windows are different in that they are made for the express purpose of beautifying buildings, controlling light, and telling a story. For some they may provide a distraction to worship, but for others they serve to enhance worship, helping them to leave the world behind, focus on spiritual truths and matters of the heart, and point them to God, much like the spire on a church.

Symbolism is the representation of events or ideas through the use of images. Many different types of artists–from writers to painters–incorporate symbolism into their masterpieces, and stained glass artists are no exception. For those who specialize in the creation of Christian stained glass the Bible offers a rich selection of symbolic images

that may serve as the basis for these aesthetically pleasing works. Christ Himself employed symbolism to relate the lessons of the faith contained in His parables. Birds, Eagles, doves, and sparrows are all mentioned in the Bible. The

majestic eagle is used not only as a sign of God’s power, but also of His love since this bird is known for the care it provides to its young. The dove is a symbol associated with the Holy Spirit, while the sparrow is connected with the notion that God watches over even the smallest and least of creatures.

The origin of man-made stained glass probably goes back as far as 2700 BC when colored glass beads were made in ancient Egypt, while stained glass windows were initially seen in wealthy Roman homes during the first century AD as well as in Middle Eastern palaces and mosques. However, it was not until the Middle Ages that making stained glass windows became a major art and the windows an important feature of the Gothic-style churches built in the mid-1100’s. Due to a populace that largely could not read, and with only a few books available, the church also served as an educational center. Bible characters and stories represented on the windows taught basic Christian beliefs to an illiterate congregation. Later, “art glass” was commissioned and paid for by workers’ guilds and wealthy merchants to glorify not only saints and kings but also, sometimes, the donors themselves. 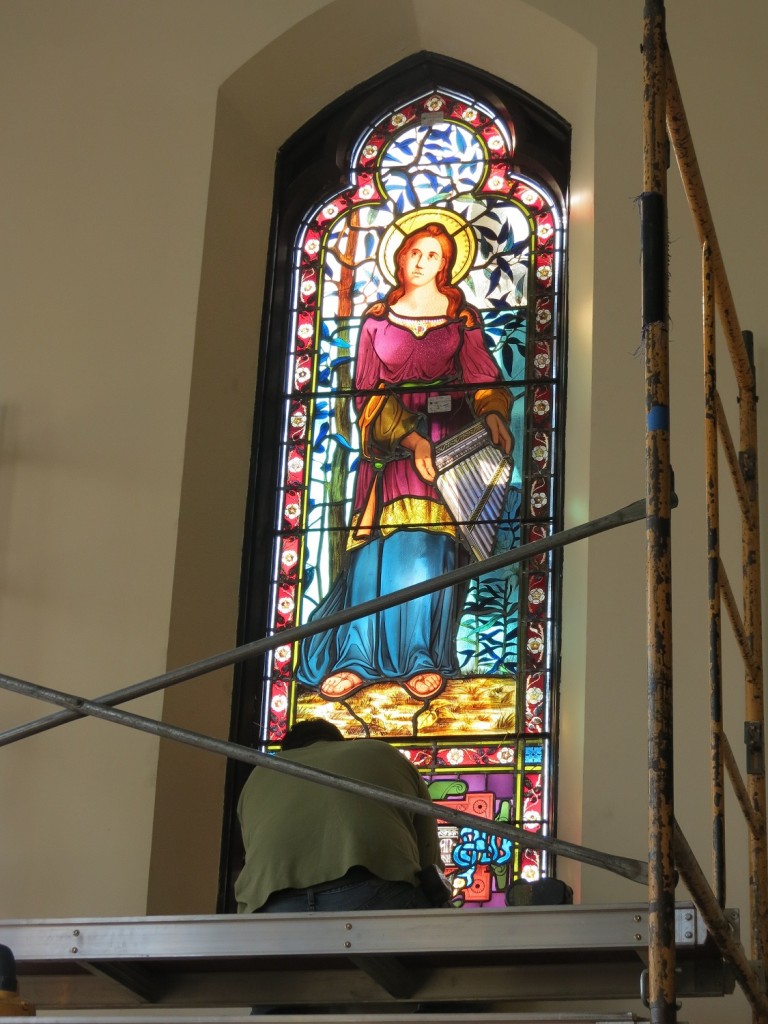 Re-installation of the St Cecilia Window

The techniques used to produce stained glass windows have remained virtually the same throughout the ages. Briefly, an artisan measures the size of the window and then, on a large white board, draws a picture to fit the window, and divides it into irregular numbered sections according to the colors chosen. Pieces of glass that have been colored with metallic oxides during manufacturing are then cut into shapes to fit into the outline, originally using a special tool called a “grozing iron”. Strips of soft, malleable lead are curved to fit the outlined sections of glass, thereby holding the pieces together while keeping the colors from appearing to overlap, and functioning as part of the design. The glass is fitted into channels of lead, which must then be strengthened and hardened by the addition of liquid cement. In larger, heavier windows, horizontal iron T-bars are used as a framework to provide needed extra strength. Early stained glass windows used paint only for small facial details or hair, but in the 1500’s artisans began to use more paint. This actually reduced the amount of light passing through, making the windows seem less majestic. The same held true for other so-called “improvements”, including the practices of removing bubbles and evening up uneven surfaces, “imperfections” which had in fact enhanced the beauty of the stained glass with added sparkle. For about 200 years, there was a decline in the use of stained glass until the 1800’s, when the matchless workmanship of gifted glass makers Louis Comfort Tiffany (1848-1933) and John La Farge (1835-1910) became sought after for decorating both churches and elegant private mansions. The depression and World War II temporarily dampened enthusiasm, but now interest has revived again, with fine arts schools teaching a new generation of artisans. It has also become a very popular hobby.

Bob noted that the recent restoration work on the chancel windows at St. Luke’s was begun last January by a three-man team from Bovard. The team spent ten days painstakingly removing, crating, and trucking the six windows out to their studio in Fairfield, Iowa. During the next 4 ½ months, the windows were meticulously cleaned and repaired by a team of four or five gifted stained glass restoration artists before being trucked back to St. Luke’s for the ten-day job of reinstalling them. Over time, rising heat from radiators, dust, and smoke and soot from candles combine to create the need for these windows to be professionally cleaned. (The only proper care of stained glass windows in situ is periodic dusting. Commercial glass cleaners must never be used since they could remove old paint on the surface.) Moreover, when a stained glass window ages or becomes affected by weather-related events, sometimes the glass begins to bulge, so it should be repaired before it gets worse, possibly developing holes or cracks.

Bob Egan has found a unique business niche in the restoration of stained glass windows. A resident of Wickford, RI and a graduate of Providence College with a degree in Business Administration, Bob co-owns Egan Church Furnishings and Restorations with his younger brother Jim. Jim, a graduate of Roger Williams University, also with a degree in Business Administration, runs the office in Shrewsbury, MA. Bob works out of his home as an agent for the company, combing the New England states plus New York for business opportunities at churches of all denominations, many of which have old properties in need of repair. A family-owned business, Egan’s was begun by their late father in 1963; the two sons joined the enterprise in 1976 and 1979, respectively, grew the business and then, upon the retirement of their father in 1991, bought out his share. Egan Church Furnishing and Restorations procures custom church furniture, pews and pew cushions for their customers, and provides general contracting for window frame repairs, plastering, and painting performed by Egan’s carefully selected, competent vendors. At this point, approximately 60% of Egan’s business is supplying the distinctive service of stained glass window cleaning, repair, and restoration.

For more information visit eganchurchfurnishings.com or contact them at eganrestorations@gmail.com or call 1-800-440-1202.