Meryl Streep used her acceptance speech at the 2017 Golden Globes to rant against President elect Donald Trump. In her sermon to the choir, Streep used the “Hollywood Foreign Press” as a convenient outline.

For “Hollywood,” she insisted that the art of Hollywood was under attack claiming to be “the most vilified segment in American society” and that all in the hall she addressed, and the industry as a whole, shared her animus for Trump. For “Foreign,” she chose to paint the President elect as xenophobic rather than one who would enforce immigration laws to protect America. And for the “Press,” where she spent the bulk of her award acceptance speech time. Here she cajoled her fellow cinematic artists to use their money and influence to defend the press as if it were an abused puppy. 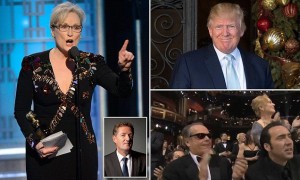 To give Streep’s diatribe claws she replaced illegal immigration with a hatred for foreign citizens and substituted bias news reporting with malice for the press as a whole. A demonstration that Streep is also talented at writing fictional script and passing it off as a true story.

Streeps’ hypocrisy deserves its own Golden Globe.  She opined, “when it’s modeled by someone in the public platform … it filters down into everybody’s life [be]cause it kind-of gives permission for other people to do the same thing. Disrespect invites disrespect.”

From where does our nation most hear encouragement for attacks on police, disrespect for human life, the vilification for opposing viewpoints, the glorification of violence, degradation of family life and sexual violence against women? Oh queen of Hollywood, thou dost protest too loudly.  The disrespect that gives permission for violence is not modeled by Donald Trump, but rather by you, Ms. Streep, and your fellow Hollywood hypocrites