Study: Healthy babies can still be born after abnormal tests 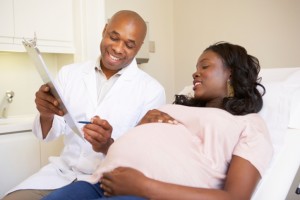 Pregnant Woman Being Given Ante Natal Check By Doctor

CAMBRIDGE, England (BP) — New research suggests women who terminate their pregnancies because of an abnormal prenatal test may be aborting perfectly healthy babies.

Doctors frequently offer birth defect tests to pregnant women whose babies are at increased risk of abnormalities. One of the tests that can be performed earliest in pregnancy, chorionic villus sampling (CVS) analyzes cells from the placenta between 11 and 14 weeks of gestation.

Physicians often believe the presence of abnormal cells indicates the baby will most likely be born with birth defects like Down syndrome. Some moms choose to abort their babies when the test results are abnormal.

Researchers at the University of Cambridge, who published their results in the journal Nature Communications, found even when half the cells of an early-stage mouse embryo were abnormal, the embryo was still able to fully repair itself because the abnormal cells self-destructed and healthy cells replaced them. In many cases, the process completely repaired a defective embryo, leaving it with all healthy cells even though some of the placental cells were still abnormal. Even in cases where 75 percent of an early-stage embryo’s cells were abnormal, the ratio of normal cells increased as the embryo developed.

“The embryo has an amazing ability to correct itself,” the senior author of the study, Magdalena Zernicka-Goetz, said in a statement.

Zernicka-Goetz’s own experience as a 44-year-old expectant mom inspired her to conduct the research. A CVS test found that as many as a quarter of Zernicka-Goetz’s placental cells were abnormal. When she spoke to geneticists about the test results, she found very little information existed about the implications of abnormal cells or the fate of the baby.

Despite limited information about the meaning of test results, some experts lead women to believe the presence of abnormal cells means their baby will be born with birth defects.

The website for Britain’s National Health Service tells readers CVS gives “a definitive result in around 99 percent of cases…. If your test is positive, your baby has one of the disorders it was tested for.”

And according to WebMD, “CVS is considered to be 98 percent accurate in the diagnosis of chromosomal defects.”

When CVS shows abnormal cells, some health experts encourage women who are considering abortion to make a decision right away rather than wait until 15 to 20 weeks of gestation, when the more accurate amniocentesis test can be done.

“If a woman chooses to terminate the pregnancy after receiving abnormal test results, the pregnancy termination will be safer than if she waits for amniocentesis results,” the Cleveland Clinic states on its website.

Zernicka-Goetz continued her pregnancy and gave birth to a healthy baby boy. But some mothers make a different choice, “based on a test whose results we don’t fully understand,” she said.

The increased frequency of abnormal cells in the embryos of older women and mothers who have had in vitro fertilization make researching the ability of the embryo to repair itself imperative. Cells with abnormal chromosomes have been observed in as many as 80 to 90 percent of human early-stage embryos following in vitro fertilization, said Thierry Voet, another senior author of the study.

More research is needed to determine if the results of the study hold true.