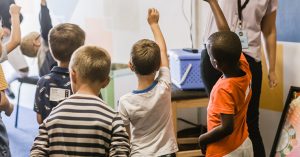 A trip to the school clinic is supposed to make kids feel better — not worse. But in Oakdale, Louisiana, parents are finding out just how sick America’s public schools are. Christin Willis says her son went to the health center for a football physical. What he got was a graphic sex survey that’s putting parents on the warpath.

Christin’s story — which is getting national attention — is unfortunately one of many. No one in Oakdale knows how many kids have been sexually harassed by these questions, since the clinic isn’t asking permission. When KPLC News contacted the Allen Parish School Board about the incident, they replied that this was a “screening tool” that’s being used by school health centers across the country. Under the Obamacare law, it turns out, more than $200 million in grant dollars was doled out to clinics like Oakdale’s. And one of the conditions of keeping the money, Breitbart found in the fine print, is turning in “behavioral” survey data from kids.

But as far as parents are concerned, no student should be subjected to this kind of questioning. “I don’t like my child being used for you to get money for a system that I don’t support. We have a health care facility, we have a doctor. If I want to discuss sexually explicit things with my children, I’ll do so in my home or at my doctor’s office — his doctor’s office,” she stated.

Moms and dads are so irate that it’s not just school officials who are scrambling to respond. Even Governor Jon Bel Edwards (D) is on the hot seat. Congressman Ralph Abraham (R-La.), one of the leading GOP contenders to replace Edwards and a doctor, brought up the survey as another example of schools undermining Louisiana parents. “I’m disgusted with what state government is doing to our children,” he said. “This is a topic that should be addressed privately by parents and their children or doctors and their patients. This is another example of how John Bel’s Department of Health is imposing its radical agenda on our state,” Abraham continued. “When I’m governor, I will fire Secretary [Rebekah] Gee on day one and reform this department from top down.”

This is yet another example of how the Left has commandeered government schools for the purpose of recklessly driving their agenda at the risk of our children’s physical, emotional and spiritual well-being. It’s time for more parents to take a page out of Christin Willis’s book and stand up for their kids! Or, even better, run for their own seat on the local school board so they can put the brakes on this radical agenda. Now is not the time to sit back!