Thanks to Fox, the Devil Will Now Have His Very Own TV Show

It’s not the “glorification” of the devil the American Family Association and One Million Moms should be objecting to on Fox’s upcoming ‘Lucifer’ TV show, but its “legitimization” of the age old Prince of Darkness.

What the expanding Lib-Left/Entertainment Industry Conquering Army want made acceptable by the pop culture, they first legitimize. Already successful in having legitimized mass abortion and on their way to the legitimization of Same Sex ‘Marriage’, they call their societal turnaround, “The New Norm”.

To the Marxists’ garbled way of thinking, everything old truly is new again. 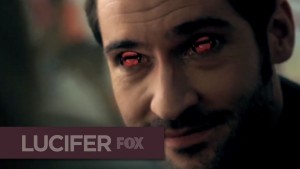 If Christian parents raised their kids to believe that the devil is evil incarnate, the Lib-Left/Entertainment Industry will now present him as a cool dude, a sort of 21st century Super Man who’s relocated from Hell to the City of Angels, where he’s merely looking for a break.

Children only get to hear of Lucifer from their parents reading to them from Scripture. Getting to see him on television, minus horns and warts, will make him much more acceptable.

Up to now, the devil hasn’t jumped out, clove-footed from the pages of the Bible at Scripture reading time, as he remains safely in the realm of the abstract.  But Fox’s dapper ‘Lucifer’ can elicit their squeals of horror by gazing at them from the boob tube with frightful, technology-advanced red eyes.

Rerouting children back to the real thing is a loss when God already has been made irrelevant in a world where prayers are banned at school in deference to the sensibilities of those with allegiance to other religions, and where references to God are banned from valedictorian speeches at graduation.

Writing God out of the plot and Lucifer in it has become de rigueur, and Satan ever on the prowl for human souls now has his own prime time television show.

“One Million Moms, an offshoot of the American Family Association, has launched a petition asking the Fox broadcasting network to exorcize “Lucifer” from its TV lineup. Calling all angels, the petition had more than 126,000 signatures on AFA’s main website and almost 16,000 on the One Million Moms’ website petition.

“Fox has announced the show will be on the network’s lineup in 2016, and a preview of the pilot episode can be seen online. “According to One Million Moms, the series “will glorify Satan as a caring, likable person in human flesh.”

“The series is loosely based on a character from Neil Gaiman’s “The Sandman” comics, which also drew fire from Christian groups. Lucifer Morningstar owns a Los Angeles nightclub and helps the police fight crime in the series.”

In real life, police in cities like Baltimore, Atlanta, and others are under intense attack and the Obama administration seems willing to nationalize them.

“Bored and unhappy as the Lord of Hell, the original fallen angel, Lucifer Morningstar, has abandoned his throne and retired to L.A., where he owns Lux, an upscale nightclub,” the Fox website for the show says.

“At the same time, God’s emissary, the angel Amenadiel, has been sent to Los Angeles to convince Lucifer to return to the underworld,” the petition says. “Previews of the pilot episode depict graphic acts of violence, a nightclub featuring scantily clad women and a demon.

“The petition says the show “previews mischaracterize Satan, depart from true biblical teachings about him, and inaccurately portray the beliefs of the Christian faith. “Fox is disrespecting Christianity and mocking the Bible by choosing to air the show, it says.

“Gaiman responded to the protest on his Tumblr page, saying, “Ah. It seems like only yesterday (but it was 1991) that the ‘Concerned Mothers of America’ announced that they were boycotting SANDMAN because it contained Lesbian, Gay, Bi and Trans characters. … I wonder if they noticed it didn’t work last time, either…”

To quote the last line in the trailer when the cute, gap-toothed little girl asks L. Morningstar “What’s your name?” and he answers: “Lucifer”, and she responds in awe, “Like the devil?” L. Morningstar gleefully says, “Exactly!”