The Babylon Code: Key To Understanding The Coming One World Economic, Governmental, And Religious System

Our entire planet is convulsing from the massive changes coming to our economic, political, and religious systems. Watching our television news and social media, millions of people are simply overwhelmed by events; it is as if our collective unconscious is being infected with dread and despair.

Images of ISIS terrorists wearing black robes and masks beheading journalists and innocent women in their attempt to establish a new Islamic caliphate are both horrific and barbaric. In response to this terrorist threat from an extreme Islamic religious sect, Pope Francis and the Vatican and a rising number of “Evangelical’ churches are calling for a more inclusive one world religion where all faiths merge.

Economic news of the potential for Greece to default on its loans and the rising practice of “bank bail-ins” where banks are now seizing the deposits of the common man in order to pay off their debts, threatens to move across the EU like falling dominoes and eventually into the U.S. To prevent the possibility of a global economic collapse a New International Economic Order is being set in motion where the dollar will not be the de facto world’s currency, but something like the BRICS nations (Brazil, Russia, India, and China) proposed basket of competing currencies, which would constitute a new one world currency.

Simultaneously, Denmark is on its way to being the world’s first cashless society, as the government proposes new laws that will allow retailers to refuse cash payment.

Already a third of the population uses the Danske Bank app called MobilePay, which links your mobile to other users’ phones and allows you to confirm payments with a simple swipe on your smartphone’s screen. In the UK, cashless technologies like Paym, and in the U.S. Google Wallet allow people buy and sell without cash. Denmark, Sweden, Norway, Finland, and Iceland are now leading the world in cashless payments, from small purchases for a pack of gum to large purchases. Five of Sweden’s six big banks now operate cashless branches and some predict the country could become cashless by 2030.

Clearly, other countries around the world, including the U.S., are quickly moving to a global cashless economic system. The final step would be the use of some kind of microchip or nano-chip implant…and a person could not buy or sell without this technology.

As we look at all these crises a common theme seems to be emerging: the “solutions” being implemented and proposed all contain the elements of globalism and the creation of some kind of new global economic, political, and religious order. It is as if history is repeating itself because thousands of years ago Mankind attempted to deal with similar problems by creating the world’s first one world religion, one world government, and one world economic system at the Tower of Babel in ancient Babylon, founded by Nimrod. Ancient Babylon was a globalist society built on mysterious but real science, technologies, and spiritual systems that have been passed on for many thousands of years through a secret priesthood. This is why it is no accident that a Babylonian commercial and economic system known as Mystery Babylon is prophesied to return, in the Book of Revelation 17:5. 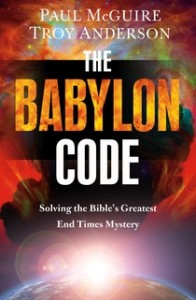 Although I have been researching Babylon for many decades, I began the most intensive pursuit of my life about five and a half years ago when I partnered with Troy Anderson, a Pulitzer Prize-nominated journalist, in deciphering the coding system imbedded in the Tower of Babel and being implemented today by a secret priesthood who plan to radically restructure our society based on the “Mystery Religions” of ancient Babylon. We believe that we have uncovered some of these “mysteries,” which can explain what is going on behind the scenes in the world today. We have co-written our research in a new book that is coming out in October called The Babylon Code.

Our research has uncovered a secret coding system passed on by secret societies who plan to recreate the one world religion, one world economic system, and one world government developed by Nimrod and recorded in Genesis 11. This secretive elite has passed on this prophetic code and occult teaching in Egypt, Rome, China, Europe, and the U.S. Our research has uncovered the secret of the ancient god-kings who ruled the world’s most powerful empires. In fact, the ancient pre-flood super civilization Atlantis provided the science and technology which allowed ancient Babylon to flourish, and while many in in the so-called higher levels of our society would ridicule such ideas, the men and women who compromise what Aldous Huxley termed the Scientific or Technocratic Elite, who currently rule our global system, have always been avid students of the science, geopolitics, and governmental structure of Atlantis, primarily through reading the Greek Philosopher Plato’s writings.

On a global cultural level the lower classes, middle class, and managerial classes, which includes prime ministers, presidents, senators, CEO’s, scientists, and college professors are clueless about what is really happening because they suffer from a socially engineered myopia and they cannot connect the dots because their brains have been programmed from youth to be left brain dominant. This means that they are good at thinking inside of the box and following orders. But due to social engineering they are unable to access their right brain, which is creative and could ask the big questions and connect the dots. When the neurological pathways are trained from childhood to bypass the right brain, eventually people become hollow shells who are able to conform to the artificial norms of society and are programmed to serve their scientific or technocratic masters.

An example of how this programming works is the social engineering system called Common Core, which is designed to create people who are capable of group think and connecting with the hive mind and “World Brain,” but not capable of thinking as empowered individuals.

As Anderson and I began to delve deeper into our research we were able to interview people who are part of this Scientific Elite, such as world class economists, the heads of NSA psy ops programs, military generals, presidents, prime ministers, and high ranking members of the Freemasons and Illuminati because we found as a general principal that these individuals were hiding nothing…everything was “hidden in plain sight” and out in the open for anyone to see. But due to their programming most people cannot see what is actually in front of them.

What we discovered and extensively document is that the chaos we see in our nation and world is largely scientifically engineered, inspired by one of the primary coding systems from Babylon, which is “Order Out of Chaos.” The fact that the U.S. dollar openly displays Illuminati symbols like the all-seeing Eye of Horus and the words “New World Order” in Latin on the base of a picture of a pyramid is evidence of the fact that no one is hiding anything! It is all in plain sight. But through extensive interviews and examination of historical documents, we found that this ancient code explains many contemporary current events.

For example, we are seeing a steady increase in the number of race riots in America and across the world. Jesus Christ spoke of this when he talked about the signs of the times, and referred to “war and rumors of wars” and said that “nation will rise up against nation,” meaning racial or ethnic groups. So Jesus Christ is telling us that in the last days there will be an increase in race wars. But what is causing those race wars in the United States are highly trained activists working behind the scenes, agents who specialize in “manufactured crisis” or chaos. In order for a new order to be established they have to destroy the old with chaos.

Now to this add hard economic realities. The Republicans in the 1990s passed a whole string of trade treaties like NAFTA and GATT and promoted the WTO, which has created an annual trade deficit of $500 billion, which caused a loss of four million jobs in places like Baltimore. In addition, the U.S. economy in 2015 shrank by around .7% which represents a massive hit on the once most powerful economy in the world. The trade deficits, which are set to continue with the TTP promoted by both Republicans and Democrats, will further destroy America’s inner cities like Baltimore. Jobs that were once available to Americans, such as manufacturing autos, mobile phones, clothing, and furniture no longer exist in cities like Baltimore.

Baltimore, like many American cities, was once a place where tens of thousands of blue collar workers could earn a good living in industries building cars, airplanes, steel, etc. But just like what happened to Detroit, these good paying jobs and industries moved to China, Mexico, and other Asian nations. The Technocratic Elite and their foot soldiers like Newt Gingrich and others did this deliberately. So now American inner cities are like war zones that look like Iraq and are ripe for the agents of manufactured crisis.

If you study the system of the Technocratic Elite established at Babylon and passed on through the ages in places like Egypt, which had millions of slaves operating under their god-king system, you see that on a global level the god-king system is emerging once again. But one of the most powerful secrets of The Babylon Code is that this secret priesthood is not hiding anything. They have learned that through sorcery, or what would now be called scientific mind control, the masses can be conditioned to love their slavery.

This is what Aldous Huxley referred to when he said “In a truly effective Scientific Dictatorship men and women can be trained to love their servitude or slavery.” When the Book of Revelation refers to the return of “Mystery Babylon” in the last days, it is talking about a global economic, religious, and governmental system that uses modern economics, science, and technology, but also uses the same occult systems that controlled the original Babylon, and that means under this “world system” the masses willingly surrender their wills to this collective hive mind. This is one of the mysteries revealed by the pyramid with the all-seeing eye of Lucifer above it and below it the words “new world order” on the back of the U.S. dollar.

Race riots, the transfer of the wealth of the middle class, and social and moral anarchy are intensifying. Events are spiraling downwards ever more rapidly and things will get much worse before they get better…we are in for a rough ride. But, at the end of it all, there will be a divine intervention, something completely unexpected is about to arrive.