THE BAD WAR: THE TRUTH NEVER TAUGHT ABOUT WORLD WAR 2 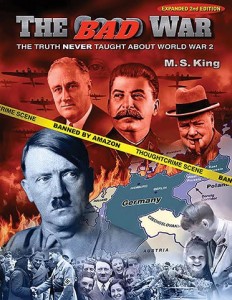 2nd Edition (Expanded after Amazon’s ban). After years of strong sales and hundreds of five-star ratings, Jeff Bezos at Amazon finally caved in to pressure and banned Mike King’s The Bad War: The Truth Never Taught about World War 2.

Why? Americans today have an almost identical recollection of World War Two as the “good war,” fought by their forebears against the “Krauts” and “Japs.”

According to our mainstream history books, “the Good Guys” banded together to stop the worst scourge in global history. There is just one problem with this official version of the history-changing event known as World War II. It’s a lie!

So, how much do we really know about that crucial event and the decades of complex European history preceding it? Why, and for whom, were the 20th century’s worldwide wars actually waged?

Read the true version of World War II in this 8.5 x 11-inch photo-journalistic chronology of what really happened—approximately 300 of the most important events of the war briefly reinterpreted through the eyes of a Revisionist historian who eliminates the propaganda.

Was the mainstream media as phony as it is now? Who was really to blame? What about the events that happened but were never reported in the press? Or wrongly reported? Or purely fabricated?

During the decades which have passed since the end of WWII, only one narrative of the conflict has been heard. It is a story which has been scripted by the victors and pounded into the minds of subsequent generations. Every medium of indoctrination has been harnessed to this end. Here is the book to break the truth blockade!