The Fight Within Debuts On Home Entertainment

Tuscaloosa, Ala. – The Fight Within, a faith-based film set in the rough-and-tumble world of mixed martial arts (MMA), premieres on home entertainment platforms Dec. 6, 2016 by GVN Releasing via Sony Pictures Home Entertainment.

With a mixture of faith, fighting and romance, The Fight Within is packed with entertainment and a message that theatrical audiences called “amazing,” “uplifting,” and “a film for the whole family.”

“It’s a family, faith-based, love story with a great MMA storyline,” Jim Davis, executive producer and screenwriter said. “It’s about overcoming and persevering against all odds. Watch it with someone who enjoys a great film.”

Davis, an ordained minister and businessman, wraps this search-for-identity story in an unusual subculture, the world of MMA. The Dove Foundation gave The Fight Within, released nationwide, its highest five-star rating. 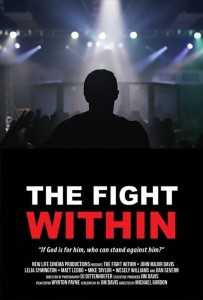 In the story, Logan Chandler (John Major Davis), a rising star in the world of mixed martial arts, leaves the ring when his gym-owner father dies while training him. Logan falls in love with a young woman of deep faith (Symington), and he seeks to overcome his troubled past and build a new life. But his new chance at life is tested when a local MMA professional (Leddo)—whose only losing fight was to Logan—forces him back in the ring.

Beyond the fight scenes, Jim Davis said The Fight Within is a universal story about one person striving to discover how to find his true identity through a relationship with God.

“We see a young man searching for an identity,” Davis said. “As he faces and overcomes challenges, The Fight Within tells a story of courage, hope, love, and faith.”

The Fight Within is available on DVD and through your favorite streaming device. Learn more at TheFightWithinMovie.com