The Globalization of Poverty and the New World Order 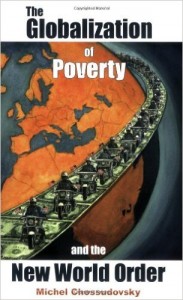 Michel Chossudovsky takes the reader through an examination of how the World Bank and IMF have been the greatest purveyors of poverty around the world, despite their rhetorical claims to the opposite. These institutions, representing the powerful Western nations and the financial interests that dominate them, spread social apartheid around the world, exploiting both the people and the resources of the vast majority of the world’s population.

As Chossudovsky examines in this updated edition, often the programs of these international financial institutions go hand-in-hand with covert military and intelligence operations undertaken by powerful Western nations with an objective to destabilize, control, destroy and dominate nations and people, such as in the cases of Rwanda and Yugoslavia.

To understand what role these international organizations play today, being pushed to the front lines and given unprecedented power and scope as ever before to manage the global economic crisis, one must understand from whence they came. This book provides a detailed, exploratory, readable and multi-faceted examination of these institutions and actors as agents of the New World Order, for which they advance the Globalization of Poverty.