The Halloween That Changed the World – Reformation Day

On October 31, 1517, something happened that changed the world. No, it had little to do with Halloween. Do you know what it was? Even the man who did it didn’t know the effect it would have. On October 31, 1517, a Roman Catholic Augustinian monk and priest by the name of Martin Luther (1483–1546) nailed a notice on the door at Wittenberg Castle church in Germany. To Luther, it was a relatively small act. This was the common way of scheduling a debate in those days. But the world has not been the same since.

Martin Luther is a pivotal historical figure. This is not because he was perfect. He certainly had flaws (don’t we all?). It is because he succeeded in piercing the veil of darkness that then shrouded the world. Four hundred ninety plus years ago, he nailed his famous “ninety-five theses” to the door of the castle church in Wittenberg, Germany. 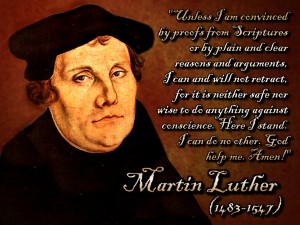 Martin was the firstborn son of Roman Catholic parents. His father, Hans, was a miner who scraped up enough money to send his brilliant son to university; there Martin studied the law. He earned his bachelor of arts in 1503 and his master of arts degree in 1505 at the age of twenty-three.

One July day, a thunderstorm frightened Martin as he walked along. He begged Saint Anne, the miner’s saint, for help, and vowed to become a monk. A few days later, Martin joined the Augustinian monastery at Erfurt.

In those days, almost everyone in Europe was a Roman Catholic. Martin Luther hoped to find salvation for himself by being a perfect monk. He did all the prayers and works and confessions required of him. He venerated the relics. But he still felt unworthy of God. He believed he could never please God; he knew his sins and his sinful nature remained and that he was worthy only of eternal punishment.

He talked to one of the supervisors in his monastery about his troubled thoughts but found no peace in the solutions offered by the Roman Catholic teaching. Luther was given the jobs of teaching and preaching, so he spent a lot of time studying the Scriptures. Finally, God showed him the answer to his doubts. “The just shall live by faith,” wrote the apostle Paul in Romans 1:17. This meant that Martin could be justified (declared not guilty and seen as righteous) before God only by faith (putting his trust in Jesus Christ as His Savior), not by any works he could do. In Scripture, he had found the truth, and the truth had set him free!

Luther began to teach this doctrine to others. But he found himself in conflict with many of the Roman Catholic doctrines. He felt certain that the wrong doctrines could be straightened out by study and debate. He felt sure that the pope and the leading men of the Roman Catholic church sincerely wanted to teach right doctrine from the Bible. He believed the church leadership had merely slipped into error, and they would readily correct themselves when the errors were exposed. This is why he nailed ninety-five points for debate to the church door on 31 October 1517. He wanted to initiate a scholarly debate.

But the reaction he received was vastly different than he expected, in two ways. First, the pope and leaders of the church did not want to debate. They did not want to change anything. They did not believe they were wrong! They firmly believed the authority to interpret Scripture lay with the pope and the church’s traditional teachings. They had no intention of listening to a German monk!

Second, the citizens of Wittenberg and many other areas began reading what Luther had written, and were in great agreement with it. (It had been originally written in Latin, the language of scholars and of the church, but it was very soon translated into the common German language.) Luther’s ideas and teaching spread like wildfire throughout Germany and soon to distant parts of Europe.

Luther continued to write about the doctrines he was finding in the Bible. He began teaching many things that were contrary to the official Roman Catholic teachings. He wrote several tracts and booklets. He was sincerely attempting to wake up and clean up the Roman Catholic Church. He was truly trying to educate the people in Scripture, for up until this time, most people only knew and believed what the church leaders told them. Most people could not read Latin, or even get their hands on a Bible. Now, they were hearing the words of Scripture, which had been kept hidden from them by their leaders. They were astonished and edified by what they were now reading.

The pope was trying to raise money, by various methods, to build St. Peter’s Cathedral in Rome. One of the methods was to sell indulgences. A friar named Tetzel came into the neighborhood hawking these slips of paper. He taught the common people a jingle that said something like, “As soon as the coin in the coffer rings, a soul from purgatory springs.” Many people still assumed the Roman Catholic church and the pope had authority over them. The only way to have forgiveness of sins, they believed, was to get it from the pope. The people were eagerly buying these indulgences to free their loved-ones from purgatory and to give themselves license to sin. Martin Luther spoke out against this practice saying it is not in line with the teachings of the Bible. The pope and other church leaders found their sales dropping off and decided to put a stop to this Martin Luther!

Luther was summoned to a religious court hearing before the Emperor Charles V, church leaders, and civil leaders in the city of Worms, Germany. They asked him to retract his writings. They commanded him to stop teaching contrary to the Roman Catholic church. He replied, “Unless I am convinced by Scripture and plain reason, for my conscience is captive to the Word of God, I cannot and I will not recant for it is neither right nor safe for a Christian to go against his conscience. Here I stand. I cannot do otherwise. God help me. Amen.”

Charles V pronounced Luther an outlaw. He declared, “We want him to be apprehended and punished as a notorious heretic.” He also made giving food or shelter to Luther a crime and gave permission for anyone to kill Luther. Luther escaped death because of the daring, undercover operation of Frederick III, Elector of Saxony (the part of Germany where Luther lived). Frederick had Luther “kidnapped” by masked men and whisked off to Wartburg Castle, where he kept him safely hidden. During his stay at Wartburg, Luther continued to write. He also translated the New Testament from Greek into German so his countrymen could read it for themselves in their own language.

But while at Wartburg, Luther seems to have made a decision that he could not let the Reformation go so far that he would lose the support of Frederick and other leaders who were protecting him. He returned to Wittenberg to try to stop people who wanted to make extreme changes in doctrine and practice. Once Luther became a part of the establishment in the Protestant principalities of Germany, he considered people who went beyond his teachings to be radicals and troublemakers. Anabaptists were preaching the equality of man, the separation of church and state, and believer’s baptism. To Luther the magisterial Reformer, this was going too far. 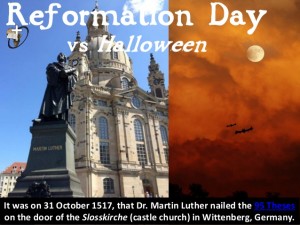 We might wonder how Luther could think this. But it might help if we try putting ourselves in his place. He was born into an extremely dark time in history. He was a monk and priest in a church that claimed to be the only way to salvation, yet it did not understand the Gospel. And, unlike today, Luther could not just read the writings of ministers in other churches or walk out of the Catholic church and into a Bible-believing church to get help. Any churches outside of the Roman Catholic church were small, persecuted, scattered in the wilderness, and secretive. Luther was brought up in, educated in, and totally surrounded by a worldview that contradicted the Gospel. But despite this handicap, God, by His grace, opened Luther’s mind to the Gospel and used him to light a light in that dark world. The changes started by Luther had far-reaching effects on politics and society. In fact, Luther was one of the most influential men to have lived from the time of the apostles to now. The Protestantism that sprang from his movement has helped to mold our civilization.

As is often true of visionary leaders, Luther was controversial and often not consistent in his views. Luther once wrote, “Do you know what the Devil thinks when he sees men use violence to propagate the gospel? He sits with folded arms behind the fire of hell, and says with malignant looks and frightful grin: ‘Ah, how wise these madmen are to play my game! Let them go on; I shall reap the benefit. I delight in it.’ But when he sees the Word running and contending alone on the battle-field, then he shudders and shakes for fear.”

Nevertheless, Luther supported violence in one of the most controversial events in his life. This was his connection to the Peasants’ War that started in 1524. At first, Luther expressed sympathy for the peasants’ complaints. But when the peasants became violent, Luther himself instigated violence by telling the nobility to treat the peasants without pity and put them down like mad dogs: “Whosoever can, should smite, strangle, and stab, secretly or publicly.”

So, Martin Luther was a complex person. He made great strides in some areas, especially in promoting the authority of the Bible alone, justification by faith alone, and freedom of the conscience. Yet, odd as it may seem to us today, Luther could not see that these teachings opened the door to more civil and religious freedom than he was willing to allow in his time. But these freedoms would inevitably come as people, including the Anabaptists and other radicals whom Luther tried to suppress, took these ideals to their natural conclusions, resulting in the religious freedoms and open society we have today.

So, what will your church be doing this Reformation Day, October 31st? For so many Halloween presents a dilemma, what do you do with a holiday with roots in the occult? How about a Reformation Day party at your church? I know that many churches have a “Harvest Day Celebration” or other such event where kids get dressed up as Bible characters and the fellowship hall is full of games to keep the kids off the streets. But I’m suggesting going a step further. Let’s make it a day where we can learn more about our Reformation roots.

October 31 celebrates the day that the Reformation in Europe began with Martin Luther posting his 95 theses on the Wittenburg church door, leading to a firestorm response in Germany. Why not use this occasion for a celebration of our Reformed heritage. And yes, this can be fun for the kids too!

Why not have a celebration where all get dressed up as characters from the Reformation (I’ve dressed up as John Calvin, Martin Luther, a peasant, and even John Tetzel (the salesman of those infamous indulgences)? When I couldn’t get a 16th century idea then I dressed as a Bible character. You can transform the fellowship hall into Wittenburg, Germany or Geneva. Here is an opportunity to go over the great “solas” of the Reformation: by Scripture alone, by grace alone, by Christ alone, by faith alone, and to God be the glory alone!