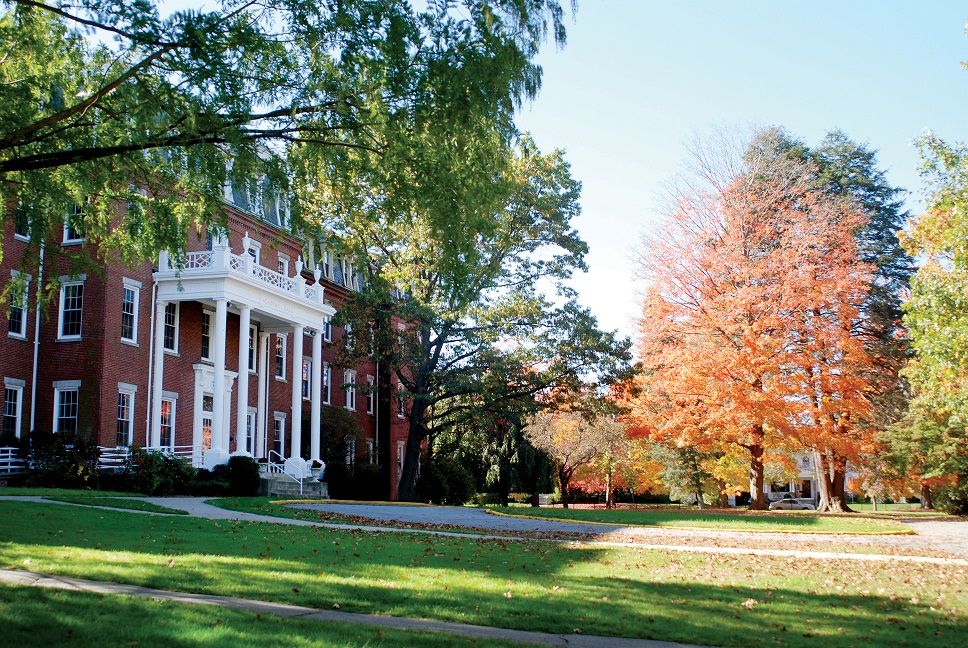 Long before there were satellites capable of beaming images of Main Street, U.S.A. through outer space, a city nestled in the smallest state in the Union was zoomed in on by divine design: East Providence, Rhode Island, the birthplace of Northpoint Bible College, formerly known in abbreviated form as Zion. Throughout the entire history of Northpoint, the hand of God has been seen guiding, inspiring, and empowering His servants. 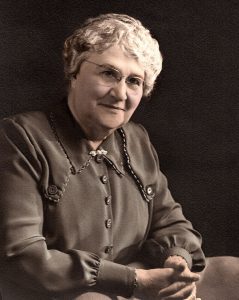 The vision for a Bible college was not birthed in a boardroom. It was birthed in the heart of a woman of prayer, a woman who hardly anticipated that she would accomplish such a great work when she was a young parentless girl growing up in Georgetown, British Guiana in the West Indies. Her name was Christine Eckman Gibson. But the story begins long before her arrival.

The deepest roots of Northpoint Bible College may be discovered in what began as a church –  Faith Church in East Providence, Rhode Island – in 1877. It was sometimes referred to as the Mission and was later formally organized under the name The Cleveland Memorial Chapel of the Church of the First Born in honor of the founders, Rev. Alpheus and Adelaide (Addie) Cleveland. Alpheus had become a Christian in 1855 and was, in his own words was, “sanctified by the Holy Spirit in 1857,” indicating his involvement in the growing Holiness Movement of the day.

Out of the church, Faith Home was birthed, a place for weary, aged, and infirm missionaries and ministers to be cared for. And out of that work, the Children’s Home was created to care for orphans and for the children of workers who served in Faith Home and later in the school. Christine Eckman became acquainted with the work in East Providence when she was recovering from a case of malaria contracted on the mission field. Eventually, she and her husband, Rev. Reuben Gibson, became managers of Faith Home.

In 1919, the Lord gave Christine Gibson a vision of a new building for the church which would also house a dining hall and classrooms. That building was constructed in 1921 and was called Zion Gospel Tabernacle. The Gibsons pastored together and also shared a vision of a school where Pentecostal ministers could be trained. Others caught the vision, and plans were made to open the school in the fall of 1924.

Rev. Gibson earnestly looked forward to her husband being at her side in the new Bible school. She leaned heavily on him and his giftings as both a teacher and an administrator. However, he was ill, very ill, and the illness continued unabated even as prayers were lifted up across the country on his behalf. 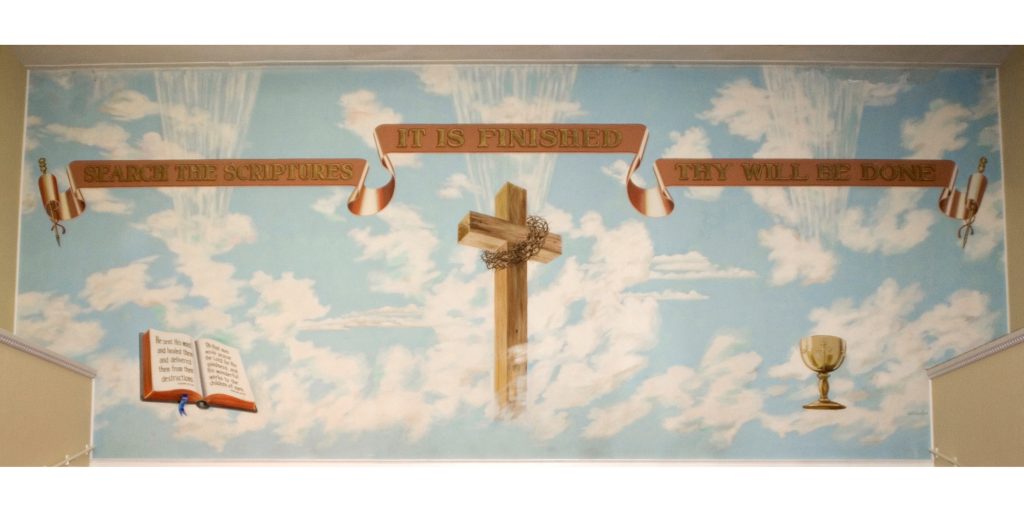 During this same period, a Christian artist by the name of Mr. Nordlen of Windsor, Vermont, had been commissioned to paint a mural at the front of the Tabernacle. The mural was divided into three panels. In the first panel, Mr. Nordlen painted a Bible with the words above it, “Search the Scriptures.” In the middle panel was the cross and above it the words, “It is finished.” Nordlen was uninspired about the third panel, though. He called for Sister Gibson to come and discuss the matter.

Leaving the bedside of her critically ill husband, Sister Gibson entered the Tabernacle only to be struck with a vision of great magnitude. As she stood at the back of the Tabernacle observing the mural, in her mind’s eye she saw a casket at the front of the church. It was clear to her that the Lord was showing her that her beloved husband would not live. Then she heard that still, small voice, “Are you willing to drink the cup?”

Bowing her heart in submission, Sister Gibson replied to the Lord, “Not my will, but Thine be done.” And then, to serve as a remembrance of her consecration that day and as a challenge to all who would behold that mural in the decades to follow, she instructed Norden to paint a chalice, with the words of Jesus, “Thy will be done,” above it. The mural was completed in May of 1924, and the first service held in the Tabernacle was the funeral of Rev. Reuben A. Gibson. After an eighteen-month illness, the Lord chose to take Reuben Gibson home just prior to the opening of the school in September 1924.

The school was initially called Mount Zion Missionary Training School. By the following year it was called The School of the Prophets, and in 1941 it was legally incorporated as Zion Bible Institute. Though the name changed, this boot camp for Pentecostal ministry training held tightly to one non-negotiable mission for ninety-five years, “to teach and train students for excellent Pentecostal ministry in fulfillment of the Great Commission.”

The second president of Zion Bible Institute was Dr. Leonard Heroo, a 1936 graduate of Zion and a powerful teacher and preacher who was raised in the Children’s Home. The tale is told that when Leonard was just three years old, he heard Reuben Gibson singing, “Come and Go With Me to My Father’s House,” in the little chapel. He got up from his front row seat, climbed the platform and reached for Brother Gibson’s hand saying, “Me, too!”

Encouraged by his spiritual mother, Christine Gibson, Leonard joined the faculty and the staff of the church following graduation. The platform would become a second home to Leonard Heroo as he grew into an internationally known orator par excellence. His most effective classroom was the pulpit where students were able to observe and emulate his oratorical method. In 1952, a much larger church building was erected and the church was renamed Zion Gospel Temple (and renamed Zion Gospel Church in 2019). When Sister Gibson was promoted to Glory in 1954, Dr. Heroo became interim pastor, and was named pastor in 1960. He also served as president of the school from Sister Gibson’s death until 1983.

Rev. Mary Campbell Wilson, a beloved faculty member and graduate of Zion, followed Dr. Heroo as president in 1983. Previously, she served as Dean of Academics from 1956 until 1981 when Rev. Eleanor Brunetto assumed that position. Rev. Brunetto was followed by Dr. Patrick Gallagher who served as Dean of Academics from 1991 until 2017. Dr. Daniel Howell was then appointed and continues to serve as Chief Academic Officer. 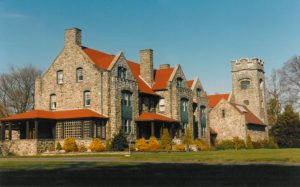 Dr. N. Benjamin Crandall was elected president in 1985, and under his leadership Zion was able to purchase the million-dollar campus of the former Barrington College in Barrington, Rhode Island. In October 1985, the school moved to that beautiful location. In 1994, Zion was authorized by the State of Rhode Island to become a four-year institution granting baccalaureate degrees in Bible. In 2000, Zion became part of the Assemblies of God fellowship, within the Southern New England Ministry Network, and Dr. George Cope was elected president of Zion.  In 2001, the college was accredited by the Association for Biblical Higher Education (ABHE), and in 2005, the name of the school was officially changed from Zion Bible Institute to Zion Bible College.

Following Dr. Cope’s transition back to pastoral ministry in 2006, Dr. Richard Lafferty served as interim president until the installation of Dr. Charles Crabtree in 2008. Just prior to Dr. Crabtree’s election, Mr. David Green, founder and CEO of Hobby Lobby, Inc., authorized the purchase of the Bradford College campus in Haverhill, Massachusetts, and gave it to the college. During the summer of 2008, the entire campus family relocated to Haverhill. Dr. Crabtree led the way in changing the financial structure of the school which included an increase in faculty and staff wages. He also worked diligently to raise the revenue for the exponentially larger budget resulting from the move. Zion continued to develop and expand its educational offerings, including its online program, under his leadership.

The year 2013, marked the arrival of the college’s current president, Dr. J. David Arnett. That same year, the school was renamed Northpoint Bible College and launched both a Master of Arts program and an Associate in Arts Program. Under Dr. Arnett’s leadership, the campus has undergone extensive renovations and repairs. Two renovations are especially popular with the students: The Green House is a popular destination for students seeking refreshments or fellowship. In the same building, a fitness center helps the students stay in shape while pursuing their studies. Dr. Arnett also expanded the college’s reach, leading the way in opening extension sites across the nation and substantially increasing Northpoint’s visibility.

Seemingly, Northpoint has come full circle in its new home in Haverhill which centuries ago saw the launching of several of America’s first missionaries to foreign lands, including Adoniram Judson and his wife, Ann. Judson established one hundred churches in Burma over his lifetime and saw eight thousand Burmese people come to Christ. Today, Northpoint Bible College continues to reach out to the far corners of the world. In ninety-five years, Alumni have ministered in over eighty nations. The mission remains intact – to go into all the world and preach the gospel!

Northpoint’s Ninety-five year anniversary will be celebrated at Zion Gospel Church, 90 Leonard Avenue, in East Providence, on Wednesday, October 23rd, at 7:00 PM. All are welcome! Learn more about the school at https://northpoint.edu.