By Fellowship of Christian Athletes 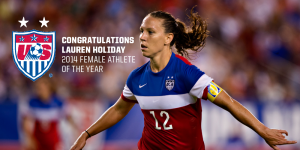 (Kansas City, MO) – Little girls around the globe are tying on their cleats and practicing their dribbling, thanks in part to the stellar soccer skills of U.S. Women’s Soccer standout Lauren Holiday.  But, when she plays in the World Cup this year, Holiday hopes her young fans will recognize something else in her besides her love for soccer—her love for Christ.

Holiday recently sat down with the Fellowship of Christian Athletes (FCA) for a feature in its bi-monthly magazine, acknowledging that “(God) gave me the world’s stage to share His Gospel.”

“Lauren Holiday is such a joy to watch on the field,” said FCA President and CEO Les Steckel, “because she plays with joy! And that joy comes from Christ. What an amazing role model for young female athletes everywhere. We can’t wait to see what Lauren does on the World Cup stage, and for Jesus.”

Holiday, a star for the United States Women’s National Team (WNT) and the National Women’s Soccer League (NWSL) champion FC Kansas City, has no shortage of accomplishments on her resume, including the 2014 U.S. Soccer Female Athlete of the Year, four NCAA All-America awards and two Olympic gold medals. But Holiday told FCA that nothing comes close to the opportunity she’s been given to follow Christ and influence the world’s largest sports stage for Him.

Holiday grew up an athlete and remembers watching Brandi Chastain and the U.S. WNT claim a 5-4 shootout victory over China to win the 1999 FIFA World Cup.  “That’s when I realized how badly I wanted to play for my country,” Holiday said in an interview with FCA. “The World Cup made it real to me. That’s when I knew I wanted to play on that stage one day.”

She got her chance early, as part of the FIFA U-20 Women’s World Cup team while still a high school senior. The U-20 team was led by former pro midfielder and youth coach Tim Schulz, who impacted Lauren with his faith. “I remember being so enraptured by how Tim lived his life,” she said. “I knew the Bible and understood Christianity, but I could see so clearly that Tim was passionate about soccer and God. It made me realize that, whatever he had, I wanted.”

After the U-20 World Cup, Holiday enrolled at UCLA, where she scored a conference-leading 19 goals in her first season and earned National Freshman of the Year honors. More importantly, her faith continued to flourish, as other Believers on the UCLA team helped her grow. Also at UCLA, Holiday met her now-husband, Jrue, a point guard for the NBA’s New Orleans Pelicans.

Still in college, Holiday earned her first start with the U.S. WNT in 2007, when she scored her first goal in a 5-0 shutout against Germany. She continued to excel at UCLA, and in 2008, was named as an alternate to the U.S. WNT’s Olympic roster. An injury to another player bumped Holiday to the official lineup, and she played in three matches. In 2009, Holiday also joined the Pali Blues, a California-based United Soccer Leagues developmental team. But despite her busy schedule, she was careful to put even more focus on her relationship with Christ, making sure to connect with Him every day. In fact, Holiday has written a devotional on the FCA web site so others can do the same.

In 2010, the Boston Breakers selected Holiday in the Women’s Professional Soccer (WPS) league draft. Holiday tallied five goals and two assists in her first season with the Breakers and was a starter in the WPS All-Star Game. Meanwhile, she finished as the U.S. WNT’s second-leading scorer, moving into the team’s starting lineup prior to the 2011 FIFA World Cup. By 2012, Holiday had played in 31 games for the U.S. WNT, including all six Olympic matches. 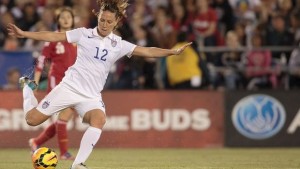 In Kansas City, Holiday earned NWSL Golden Boot and League MVP honors in 2013 and, last year, tallied assists on both Blues’ goals in FCKC’s 2-1 NWSL championship win over Seattle. But many note what Holiday does before her games rather than during them.

Prior to each FCKC home game, Holiday invites everyone from the opposing team to pray. And when the Blues are on the road, she leads the team and others in prayer, too.

“Success is winning a gold medal,” Holiday said in an FCA video. “Success is being the best soccer player I can be. But the wonderful, wonderful thing about loving Jesus is, it’s not about me. And the spotlight isn’t on me. So when I do step out on the field for that gold-medal game or the 2011 World Cup against Japan, I get to play with freedom because I don’t have to worry about how I score or if I score or what happens if we lose or if I make a bad pass, because success isn’t determined on that with Christ. Yes, I love to win, and I know that God loves when I win, but when I walk away, my identity is still the same. I’m still a follower of Jesus Christ and, in a loss or in success, I can still be humble and give Him the glory.”

Above all, Holiday is confident that she was blessed with her on-field talents as a way to praise Christ and bring glory to Him through the game she’s grown to love.

“I know I wasn’t given these talents to be mediocre,” she said. “God has blessed me abundantly with the ability to play soccer—the world’s game. Every time I step foot on the field, I know that, through my effort and play, I’m glorifying Him. He gave me the world’s stage to share His Gospel, and that is what I hope I do.”

For more information about the Fellowship of Christian Athletes, visit FCA’s web site at www.fca.org