Tim Tebow urges student athletes: ‘Be bigger than sports,’ use skills to give honour to God 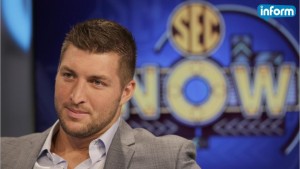 Tim Tebow says, ‘Focus on who you can be, and allow the platform that sport gives you to impact other people.’

Tebow believes it’s wonderful for students to feel passionate about athletic activities, according to USA Today High School Sports. However, he said students should also use their skills to give honour to God.

“Focus on who you can be, and allow the platform that sport gives you to impact other people,” Tebow said. “You are changing other people’s lives for better or worse, every day. Be bigger than sports. Don’t just be an athlete – be more than an athlete.”

Tebow himself does more than just play football. He started his own organisation called the Tim Tebow Foundation, which helps build hospitals in impoverished areas, creates playrooms in children’s hospitals, provides financial aid for adoptive parents, and hosts prom nights for special children, among many other things.

“You only have so many games, so many opportunities to win a championship,” said Tebow, who now works as a football analyst for the SEC Network. “Your career is short, but your life is going to be a lot longer.”

“I’ve been fortunate to be part of championships,” he added. “They don’t last forever, but what you do for other people will. That’s what real success comes from.”

Tebow is always ready to serve God, whether it be in the football or mission field. When Fox Sports recently asked if he’d be interested in entering the political arena, Tebow did not close down any doors.

“You know, I don’t know in this time in my life, but if there’s a chance you can make a difference some day in something, then that would be intriguing,” he said.