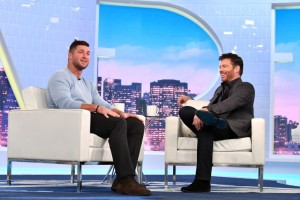 He is one of the most outspoken athletes in America about his Christian faith. During his college football career, he frequently wore references to biblical verses on his eye black and his signature stance kneeling and praying on the sidelines became a modern neologism known as ‘Tebowing.’

But even he was shocked by a quirky confluence of time and football stats that could not be explained away as coincidence.

“We were playing for the national championship in college on January 8, 2009 and I decided to wear John 3:16 under my eyes,” Tebow recounted to Connick. “During the game, 93 million people decided to Google John 3:16 and it was a pretty cool moment.

During the game, Tebow threw two touchdowns, including an 80-yard TD to Demaryius Thomas on the first play of overtime, as the Broncos won 29–23.

“I just went out there and tried to do whatever I could to win a playoff game,” he told Connick.

After the game, Tebow was on his way to the press conference and the Broncos’ VP of public relations, Patrick Smyth, jumped in front of him and said, “Timmy, do you realize what just happened?”

“Yeah, we just beat the Steelers and we’re going to play the Patriots,” Tebow replied.

“No, do you realize what happened?” Smyth asked.

“It’s exactly three years from the day you wore John 3:16 under your eyes,” Smyth informed him.

In the game, Tebow set an NFL record for yards per completion in a playoff game at 31.6. Even media sources marveled that Tebow’s passing yards (316) and yards per completion (31.6) reminded them of the Bible’s John 3:16 verse. Amazingly, the Nielsen TV ratings for the game peaked at 31.6.

Also, John 3:16 was the top search item on Google the next morning, followed by Tebow and Tim Tebow. Tebow concluded by telling Connick, “A lot of people will say it’s a coincidence, but I say BIG GOD.”