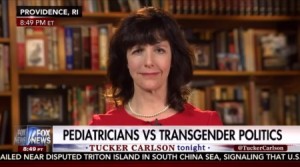 WASHINGTON, D.C. – A nationally recognized pediatrician offered a jolting reality check about the dangers of encouraging children to think they are transgender and prescribing hormone blockers to prevent them from developing.

On October 11, the Heritage Foundation sponsored a forum on transgenderism at which Dr. Michelle Cretella said it is child abuse to facilitate gender confusion in children by helping them “transition” to the opposite sex.

“Chemical castration is what you’re doing when you put any biologically normal child on puberty blockers,” said Cretella, the president of the American College of Pediatricians. “It’s treating puberty like a disease, arresting a normal process which is critical to normal development.”

The doctor’s truth crusade did not stop there. “Sterilization is not good for kids,” she flatly stated. “Prepping them for what will likely result in a case in girls of a double mastectomy at 16 is not how you treat depression or anxiety.”

She added that she speaks from a great deal of personal experience in “treating teenagers with depression, anxiety, even suicidal depression.”

Transgender ideologues like Zack Ford at ThinkProgress tell parents to observe and let their 1 ½-year-old’s behavior gauge his/her/ze’s gender. “Children as young as 18 months can begin to articulate aspects of their gender,” Ford claimed, “and it’s the children themselves who tell their parents about their gender identity.”

Cretella spoke against such agenda-driven use of youngsters. “Indoctrinating preschool kids with the lie that you can be trapped in the wrong body … disrupt(s) their normal reality testing and cognitive development,” she explained. “Those things are abusive.” The pediatrician characterized the transgenderization of youth as “large-scale child abuse.”

Breitbart noted the pervasive influence of LGBTQI activists who say the government should pay for dangerous drugs, sterilization, and castration — beginning at toddler age.  “The children-choose-their-sex claim was strongly pushed … by former President Barack Obama,” the conservative outlet pointed out. With Obama’s official initiative, the “biology-does-not-matter campaign” is being pushed “into schools and workplaces, into civic society, media, and law.”

Breitbart claimed that trans activists and organizations are “directly or indirectly funded by pharmaceutical companies.” Their goal is to “force Americans to accept the ‘gender identity’ claims made by each person, regardless of scientific data about genetics, biology and the variety of normal behavior and appearances.”

In a recent Heritage Foundation forum, Cretella pointed to liberal studies that seem to support LGBTQI conclusions. “As to the studies, there are two that I am aware of that claim affirming your child’s gender confusion is good for them,” Cretella stated. She then proceeded to effectively refute the studies for myriad logical reasons.

“Number one, it assumes that coaching a child into a fixed-false belief is mentally healthy,” she said about the two pro-trans studies, but “science doesn’t allow you to assume your conclusion.”

“Number four, the control group of ‘mentally healthy children’ are the siblings, most of them are siblings of the trans-identifying child” and not an objective control group.

“Number five, the parents were the ones evaluating the mental health of the children,” the pediatrician said. That revelation evoked laughter from conference attendees.

“This is not science,” Dr. Cretella concluded regarding the two pro-trans studies. “I don’t think you need to have an M.D. or a Ph.D. to know that’s not science — that’s ideology masquerading as science.”

“The crux of the matter is that while the transition-affirming movement purports to help children, it is inflicting a grave injustice on 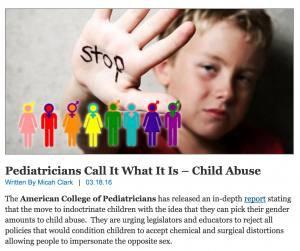 them and their non-dysphoric peers,” Cretella explained in an article for the Daily Signal.

She charged LGBTQI-friendly professionals with engaging in “massive, uncontrolled, and unconsented experimentation on children.” She said gender confusion is quite common in preadolescents and adolescents and it most often resolves after puberty.

“Today’s institutions that promote transition affirmation are pushing children to impersonate the opposite sex,” she said, “sending many of them down the path of puberty blockers, sterilization, the removal of healthy body parts, and untold psychological damage.”

Cretella labeled this promotion of transgenderism “nothing less than institutionalized child abuse.” She called for “an immediate end” to “pubertal suppression, cross-sex hormones, and sex reassignment surgeries in children and adolescents, as well as an end to promoting gender ideology via school curricula and legislative policies.”