Trump Takes Matters Into His Own Hands, Releases Petition Calling on NFL Players to Stand

By Jack Davis
President Donald Trump, who earlier this week scoffed at the NFL’s announcement that it would not force players to stand for the national anthem, is now enlisting all of America to join his side against the league and its anthem protests.

Trump and Vice President Mike Pence released a petition demanding all players and fans stand for the national anthem, according to New York Daily News. 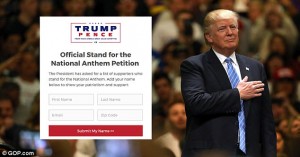 “The President has asked for a list of supporters who stand for the National Anthem. Add your name below to show your patriotism and support,” the petition reads, before asking supporters to enter a name, email and zip code.

For the past month, Trump has pushed back against the NFL’s protests, in which players refuse to stand for the national anthem or make other gestures they say are part of protests against racism.

Trump has demanded the league force players to stand, but this week the NFL said that was a step too far. “We believe everyone should stand for the anthem,” NFL Commissioner Roger Goodell said. “That’s an important part of our policy, it’s also an important part of our game that we all take great pride in. It’s also important for us to honor our flag and our country and we think our fans expect us to do that.”

However, Yahoo! Sports reported that Goodell stated the league would not require anyone to stand.

“This is something, what we’ve tried to do is we’ve tried to deal with the underlying issue and understand what it is they’re protesting and try to address that matter. The important thing for us is to be able to do that and take that opportunity to make real differences in our community. That is really what’s ultimately going to be the important aspect for us long term. Because this is a long-term issue,” he said, calling the players’ reasons for their anthem protests “complex.”

Trump has said the issue is simple: Players should stand out of respect for the flag. Commentator Jean Card said the issue is one of sadness — adding that “the question now is whether we can still be pleasant while feeling so frustrated,” according to U.S. News.

“The next chapter of the NFL’s kneeling controversy will play out over the coming months as fans and sponsors decide whether to continue supporting an institution they feel has let them down, or downright offended them,” she wrote.

“(M)y guess is that we will all continue to simply rant and rave and disagree about the conduct of NFL players, but nothing will really change. The players will not give up their right to protest the country that has made them rich, and the amorphous cause they support will not make any progress. Many fans who find the kneeling to be a disgrace will continue to watch the game, but with less joy.

“Some will boycott,” she added. “And they will miss what they loved about the game.”