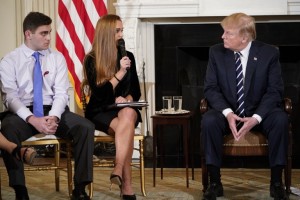 US President Donald Trump takes part in a listening session on gun violence with teachers and students in the State Dining Room of the White House on February 21, 2018.
Trump vows ‘strong background checks’ as he met with school shooting survivors. / AFP PHOTO / Mandel NGAN

(CBN News) The president will talk with state and local leaders on Thursday followed by a meeting with the state’s governors in an effort to make school safety a top priority.

[Charisma News] On Wednesday, President Donald Trump sat down with students, parents, and teachers affected by gun violence to talk about how to improve school safety. (Photo Credit: Jonathan Ernst/Reuters)

“It was very scary,” said Julia Cordover. “I appreciate you hosting me. I am confident you will do the right thing.”

“We lost 17 lives but the ripple effects throughout the community are devastating,’ said Christine Hunschofsky, Parkland’s mayor.

“Time has stood still,” Parkland School Shooting survivor Sam Zief says. “I lost my best friend who is practically my brother, I am here to use my voice because he can’t.”