(WNS)–Jamaican police are looking for clues in the murder of two U.S. missionaries whose bodies were found the last weekend in April in the Caribbean island’s rural north coast area.

Harold Nichols, 53, and Randy Hentzel, 48, worked with the mission group Teams for Medical Missions, which offers free medical care in Jamaica along with community outreach and sharing the gospel. Both men were on their way to check an ongoing house-building project when they were killed. Local authorities found one body and two motorbikes in bushes along a rural road before finding the other body a day later. 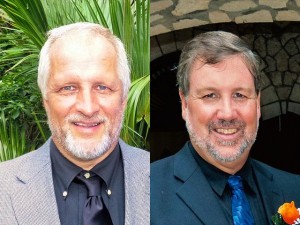 Nichols and his wife, Teri, served for 12 years as Teams for Medical Missions’s first full-time missionaries in Jamaica. Teri hosts a Bible club in her basement every Wednesday that welcomes more than 100 children. Nichols learned how to build homes for needy families and became the organization’s building coordinator.

“Harold truly became a Jamaican,” said Anne Clay, a medical coordinator with Teams for Medical Missions. “If a hurricane removed the roof off your home, he was the first person to show up with a tarp.”

Hentzel and his wife, Sara, who have five children, worked as full-time missionaries with the group for six years. The couple had earlier gone through the Bible Training Center curriculum, a three-year program that equips people to be pastors and lay leaders in churches. The Hentzels started the training program in Jamaica, where it continues to grow.

“That was Randy’s passion,” Clay said. “He started his first class four years ago and they graduated in October. Now there are five separate classes going on.”

Jamaican police on May 2 said they have no suspects and are searching for a motive for the murders. But Jamaica is plagued with high violent crime rates. The island of about 2.7 million people suffered 1,200 killings in 2015, a roughly 20 percent increase from the previous year.

“I can tell you we’re working assiduously to bring resolution to this matter,” said Assistant Police Commissioner Ealan Powell. “But the motive is still very unclear.”

U.S. Embassy public affairs counselor Joshua Polacheck said the staff was in contact with the victims’ families and the ambassador had contacted the highest levels of Jamaica’s security forces.

The Teams for Medical Missions Facebook page is flooded with promises of prayers as well as people in Jamaica offering assistance. Clay described the public response and support as unprecedented.

“When I got the word on Saturday night, my first heart’s cry was, ‘Lord, bring revival to Jamaica,’” Clay said. “That’s where we are right now. We’ve felt the outpour and the love, and it’s unbelievable.”