U.S. psychiatrists speak out against euthanasia 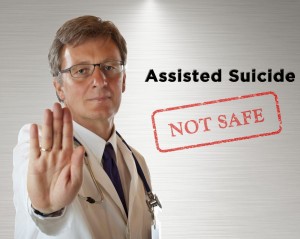 (WNS)–The largest organization of psychiatrists in the world has rejected its members’ involvement in euthanasia for non–terminally ill patients.

The American Psychiatric Association (APA) assembly and board of trustees approved a position statement in December for the organization’s 25,000 member psychiatrists, stating, “A psychiatrist should not prescribe or administer any intervention to a non–terminally ill person for the purpose of causing death.”

Although euthanasia, where a doctor administers a life-ending drug, is not legal in the United States, five states have laws allowing physician-assisted suicide, where a doctor prescribes a lethal drug for patients to take themselves. And although those states currently require the patient have a terminal illness, critics argue the path to providing assisted suicide to those with mental illness or “unbearable suffering” is a slippery slope.

“So far, no other country that has implemented physician-assisted suicide has been able to constrain its application solely to the terminally ill, eventually including nonterminal patients as legally eligible, as well,” said Mark Komrad, a member of the APA Ethics Committee, according to reporting by BioEdge. “This is when psychiatric patients start to be included.”

Canada legalized euthanasia in June and initiated a review of extending the law to minors and “requests made by individuals with mental illness as their sole underlying condition.”

In Belgium, which has the most liberal euthanasia laws in the world, it is now commonplace for doctors to euthanize people with mental illness, including depression and dementia. From 2014 to 2015, doctors euthanized 124 patients with “mental or behavioral disorder,” 3.1 percent of the 3,950 cases in those two years.

The practice of euthanizing people with no terminal illness has come under scrutiny, especially in the psychiatric community. Karl Benzio, a psychiatrist and member of the Christian Medical and Dental Association, said the APA’s statement doesn’t go far enough. Benzio is the founder and clinical director of Lighthouse Network, a Christian addiction and mental health helpline.

Benzio said the APA statement was a “passive endorsement” of physician-assisted suicide for terminally ill patients—something he called a “diplomatic straddling of the fence.”

“We are here to heal,” said Benzio. “When someone is suicidal, we are going to help them.”

He agreed it is only a matter of time before the standard for who qualifies for physician-assisted suicide in the United States expands to someone with “unbearable suffering.”

“It is dangerous to give anyone the right or power to kill another person, especially when that criteria of what defines the victim keeps changing. The physician is often the last voice protecting the vulnerable population,” Benzio said.

If the APA does not expand its positon to include all patients, Benzio would at least like it to attempt to influence legislation in the United States to mandate a required psychiatric evaluation before any patient is allowed to commit physician-assisted suicide.

“We are the suicidologists,” said Benzio. He argued it would be malpractice not to call a cardiologist for a patient with a heart attack. Why, then, can a doctor in the United States prescribe life-ending drugs to a person wishing to die without consulting a psychiatrist?