US Dept. of Justice Tells Calif. Gov. Gavin Newsom to ‘Do More to Accommodate Religious Worship’ 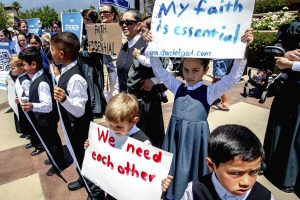 FILE – In this Sunday, May 3, 2020, file photo, young members of the Church of God hold signs during a demonstration against California’s stay-at-home orders that were put in place due to the coronavirus outbreak, in Rancho Cucamonga, Calif. An appeals court has upheld California Gov. Gavin Newsom’s ban on in-person church services amid the coronavirus pandemic. The split ruling found that government’s emergency powers override what in normal times would be fundamental constitutional rights. The judges in the majority wrote that the state can use unusual powers as it deals with a “contagious and often fatal disease.”(Watchara Phomicinda/The Orange County Register via AP, File)

WASHINGTON – The U.S. Department of Justice (DOJ) has sent a letter to California Gov. Gavin Newsom, urging him to “do more to accommodate religious worship” as “there is no pandemic exception to the U.S. Constitution and its Bill of Rights.” It noted a discrepancy in treatment by the State — that while the entertainment industry is allowed to operate if social distancing is practiced, churches are not similarly permitted to hold in-person gatherings while exercising strict safety measures.

“We are writing to you to raise several civil rights concerns with the treatment of places of worship in Executive Orders N-33-20 and N-60-20 and documents relating to the California Reopening Plan,” reads a letter written to Newsom by Assistant Attorney General Eric Dreiband.

“Of course, we recognize the duty that you have to protect the health and safety of Californians in the face of a pandemic that is unprecedented in our lifetimes,” he wrote. “You and other leaders around the country are called on to balance multiple competing interests and evaluate the constantly changing information available to you about COVID-19, and make your best judgment on courses of actions.”

However, Dreiband pointed to the statement recently released by William Barr, which noted, “[E]ven in times of emergency, when reasonable and temporary restrictions are placed on rights, the First Amendment and federal statutory law prohibit discrimination against religious institutions and religious believers. Thus, government may not impose special restrictions on religious activity that do not also apply to similar nonreligious activity.”

The assistant attorney general likewise advised that laws that do not treat religious activities on par with nonreligious ones, and are not neutral and generally applicable, are not valid unless they can be proven to utilize the least restrictive means of burdening the activity.

Dreiband noted that the “essential workforce” list compiled by the California Public Health Officer Dr. Sonia Angell only states that faith-based services are essential if provided virtually, thus banning any in-person services even when social distancing is exercised. But yet, even the entertainment industry is permitted to operate when telework won’t suffice, as long as workers follow “public health guidance around social distancing.”

“This facially discriminates against religious exercise,” Dreiband wrote. “California has not shown why interactions in offices and studios of the entertainment industry, and in-person operations to facilitate non-essential commerce, are included on the list as being allowed with social distancing where telework is not practical, while gatherings with social distancing for purposes of religious worship are forbidden, regardless of whether remote worship is practical or not.”

He also noted that the State’s reopening plan does not allow in-person church services until Phase Three, while malls, restaurants and schools may resume operation with safety guidelines in place.

“This constitutes precisely the kind of differential treatment the Supreme Court identified [in legal precendent] …,” Dreiband stated. “While it is true that social distancing requirements applied to places of worship may inevitably result in much smaller congregations tha faith groups would like, … many places of worship are quite content to operate at 15-25% capacity in a way that allows for social distancing between family groups.”

He said that while the DOJ isn’t going to dictate to the State exactly what to do, the department believes that “the Constitution calls for California to do more to accommodate religious worship, including in Stage Two of the reopening plan.”

As previously reported, a coalition of pastors under the umbrella of the organization Church United recently announced their intention to open their doors on May 31 with strict social distancing, screening and personal hygiene requirements in place.

Like the DOJ, they wish for Gov. Newsom to include indoor church services in Phase Two of the four-stage “Resilience Roadmap” instead of Stage Three and have been communicating with the governor’s office in attempt to work something out.

“Our church made 10,000 masks for doctors. We made gowns. We made all sorts of things when there was an enormous shortage,” outlined Matt Brown of Sandals Church in Riverside. “Our church came together to provide electronic devices for seniors who are isolated, who haven’t seen their family members in six weeks.”

“[The governor is] not concerned about that, but suddenly when we want to gather to pray or to worship, he [won’t allow it]. To me, that’s hypocritical,” he said.

To date, 1,200 pastors have signed the “Declaration of Essentiality for Churches.”