On Thursday, June 26 the US Supreme Court ruling on McCullen v Coakley unanimously overturned the odious Massachusetts abortion clinic Buffer Zone law. It was a stunning victory after years of suffering painful losses in the lower courts. In effect, it also overturns nearly all the other “buffer zone” laws across America.

The Massachusetts buffer zone law required people with a pro-life message to stay at least 35 feet from the entrance to an abortion clinic, even if that included a public sidewalk or street. But pro-abortion people affiliated with the abortion clinics could get as close as they wanted. 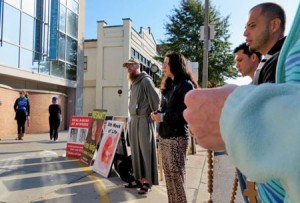 As we pointed out in our analysis of this case back in January when the arguments were made before the Court, many people across the political spectrum thought this challenge had a good chance of winning. The “buffer zone” is one of those totalitarian and clearly unconstitutional dictats that liberals in power proclaim and just assume they can get away with – and usually do in the pliant lower courts. But even stacked with Obama appointees, the Supreme Court turned out to be a different beast. 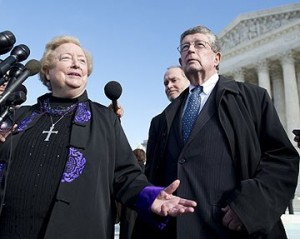 Attorney Philip Moran stands outside US Supreme Court with lead plaintiff Eleanor McCullen, a longtime pro-life sidewalk counselor.
Other attorneys who worked tirelessly on this include Michael DePrimo and Mark Rienzi.
[Photo: Aol.com]

No one dreamed it would be such an overwhelming victory. The ruling came as a shock to both  sides because it was unanimous, 9-0. When doctrinaire leftists like Ginsburg, Kagan, and Sotomayor rule against you, as a liberal you know you’re in trouble. It’s a particular blow to Massachusetts Democrats in the Legislature, and Attorney General Martha Coakley, who arrogantly supported this.

Read the text of the ruling here