In 2015, many people pride themselves in being Monday morning quarterbacks when it comes to the Vietnam War. They look back and say, “We should have never put our nose in another countries business. It was an unjust war and we should have stayed out of it. How can you as a soldier of the Vietnam War justify your actions of going to war and killing people ten thousand miles away?”

However, the year was 1965 and we did not have the luxury of being a Monday morning quarterback. There was only the moment and the possibility of nuclear war breaking out at any time. You have to remember the cold war, and our fear of the “red menace” (Soviet Union).  The U.S.S.R. had nuclear arms aimed at us, and we had nuclear arms aimed at them.  China was also a Communist Country.  And there was Castro and Communist Cuba just 90 miles from Florida.  Remember the Bay of Pigs in the early 60’s? We were on the brink of nuclear war.

The thought at the time was that if we allowed these countries to become communist, then they would all fall like dominoes.  We had “advisers” in Vietnam from the early 60’s onward both Democrats and Republicans urging us to intervene and resist Communism at all costs. Therefore, America believed that Communism was a threat to the United States and if you believed in the Domino Theory, which said if Vietnam were to fall, so would the rest of Southeast Asia like a row of dominoes. I believed that, as thousands of Americans did back in the 1950’s and 1960’s. 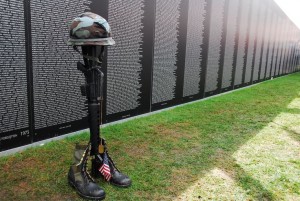 A helmet, rifle, set of dog tags and pair of boots, called a Fallen Soldier Battle Cross, stands in front of the Vietnam Memorial War replica in tribute to those killed in action at the Vietnam Veterans Homecoming Celebration at the Charlotte Motor Speedway March 31. (Photo by Sgt. Katryn Tuton/ 50th Public Affairs Detachment).

In 1970 I was assigned to the 34th Infantry Platoon Scout Dog Unit in Bien Hoa, Vietnam. My title: Point Man! My Scout Dog (Casey) was trained to alert on any and all dangers that were lurking in the jungles around us. By God’s grace, I survived!

As the war was drawing to a close, the country was turning its venom and malicious anger on its returning soldiers more than on its politicians. We were scorned, ridiculed and demoralized when we returned to civilian life. Some Vietnam Vets were even spat upon. Unlike other Wars, Vietnam Vets crawled back into society with no pats on the back, no applause, no ticker tape parades and no praise from their fellow countrymen. It was a demoralizing blow to thousands of men and women who proudly served and fought for their country like their father’s before them had done. I and many of my fellow Vietnam Veterans choose to believe that the United States became militarily deadlocked in the proxy war in Indochina but prevailed on a global level in the Cold War. The USSR not only lost the Cold War but ceased to exist in 1991. “The evil empire fell!”

Vietnam has passed! Now, there is Afghanistan, Iraq, Iran, Yemen, Syria, Kuwait, Pakistan, Somalia, Asia and the Middle East, including ISIS Militant Groups and loyal supporters of Worldwide Terrorism. What will be the next battle cry for those protesters of War? What will be our next Vietnam and how will those who walk on the path with the proverbial naked King, react to our future oppressors? FREEDOME COMES WITH A PRICE!

I have no regrets or guilt, in the part I played as a combat infantry man in Vietnam. I responded to the wisdom and knowledge of the time. People often ask me, “Do you ever forget the gruesome things you saw and did in Vietnam?” I tell them “No, but I have learned to make friends with them.” I also have made a pledge to my fallen comrades to keep their memories alive and to be their voice, as long as I have breath in my being! So Bob, Bill, Jackie, Frankie, Louis, (forgive me guys for not naming the rest), my tears have blurred my writing. Thank you all for giving your lives for our country. Guys, did I do you proud? It’s funny; I never feel I’ve done enough. God, please tell me, I did!

– James J. Ricci is the Pastor of Counseling at the