Washington to Go by ‘Washington Football Team’ Until Further Notice 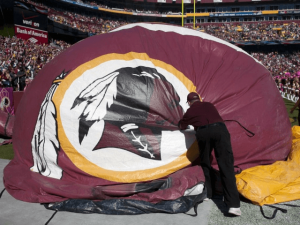 According to ESPN’s Adam Schefter, the football team formerly known as the Washington Redskins will instead refer to itself as the Washington Football Team, until a new name is chosen. The team will however, keep their burgundy and gold colors.

According to Schefter: Fans will be able to purchase “Washington Football Team” merchandise from Fanatics and NFL Shop in the coming days.

The team retired the name it had used for 87 years on July 13 after launching a thorough review 10 days earlier. Team owner Dan Snyder had, for years, resisted consideration to change the name — telling USA Today in 2013 to “put it in all caps” that he would never make such a move. Some who worked for Snyder said they believed then that he would rather sell the team than use a new name.

The movement to force the Redskins to change their name has been going on for decades. Though, it gained renewed focus after FedEx, Nike, and Pepsi, threatened to end their deals and/or stop selling the team’s merchandise until the name changed.