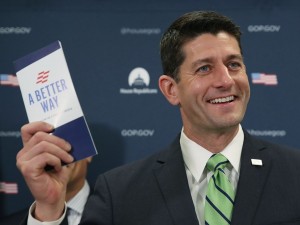 Not remarkable: A Republican officeholder says the tax code should be simplified to the point where you could file your taxes on a postcard. We’ve been hearing this since the days of Ronald Reagan at least (maybe people were saying it before that but I would have been too young to remember), and it’s one of the few policy ideas that Republicans of all stripes can agree on, at least in theory. That said, no one has ever advanced a serious bill designed to make it happen.

Somewhat remarkable: The Republican officeholder saying it now is the Speaker of the House, who is in a very strong position to potentially make it happen, and who actually put a fair amount of effort into developing a video that makes the prospect of not adopting this change seem pretty insane. Hmmmmm . . .

The substantive argument for this is a slam dunk. The tax code is only so complicated because politicians like to use it as a tool to manipulate people’s behavior – to “incentivize” people to do the things they want them to do, lest they feel the wrath of the IRS for doing otherwise. This retards economic growth, costs people otherwise disposable income and causes both individuals and businesses to prioritize tax avoidance instead of simply being productive and earning as much as they can.

There’s no reason in the world we shouldn’t go to a simpler system with fewer actual taxes, lower rates and few or no loopholes. Everyone would better understand their obligation, and everyone could stop wasting time trying to master their tax strategies and just get some damn work done. The political class would hate it because it would take a lot of their power away, but normal people would love it – including many you would not characterize as ideologically conservative. Because it’s just common sense.

But Beltway Republicans have long given lip service to this idea, yet have never come even close to making it happen. Why? One theory says they don’t really want to because they love using the tax code to manipulate people as much as the Democrats do. They just want to manipulate it in favor of Republican-friendly constituencies.

I think that may be the case with some very assimilated Republicans, but I think most of them (Ryan included) really would love to simplify the tax code because they believe it would be better philosophically – and they know it would be a rocket boost for the economy. The problem is that they’re not sure taxes are really a hot button issue with voters, and they don’t have confidence they’ll be rewarded for spending significant political capital making it happen.

To me, that’s crazy. This would be one of the most impactful policy changes the Congress could make. It would affect just about every American in a positive way, by saving them the money they spend having a professional prepare their taxes, and saving them the time they waste trying to figure out how to get through the filing process. Very rarely can the federal government make a move that is felt personally and directly by most people, and in a positive way. This would be such a move. It’s astounding to me that they are so reticent about doing.

I suppose that argues for theory that they don’t really want to do it. If that’s the case, Ryan has left an awfully big motsaball out there by producing this video, making such a compelling case for it and letting us all know he’s working on it. Why do that if you expect – or even intend – to fail?