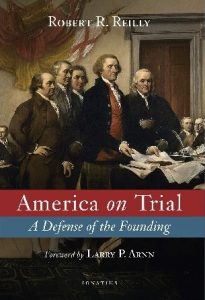 SAN FRANCISCO – Given the last year and a half, it is no surprise faithful Christians and their leaders have been decrying the decay of the moral fabric of society. In the release of the expanded paperback version of AMERICA ON TRIAL, Robert R. Reilly not only declares the Founding Fathers of the American Republic not guilty for the country’s moral disintegration, but also boldly explores the deception that Black Lives Matter has spread and why their campaigns have been so intentionally destructive.

The expanded edition of AMERICA ON TRIAL features a new chapter, titled, “Is Slavery the Founding’s Fault?” in which Reilly addresses The New York Times Magazine’s 1619 Project and debunks its claim that racism, grounded in the history of slavery, “runs in the very DNA of this country” and that the Founding Fathers promoted slavery. He also discredits the notion that the “Three-Fifths Clause” of the U.S. Constitution was meant to deem slaves less human. In contrast, it was designed to lessen the power of the slave states.

Reilly, former special assistant to President Ronald Reagan and author of Making Gay Okay, is currently the director of the Westminster Institute. In his twenty-five years of government service, he served as special assistant to the President and as director of the Voice of America, and he was also senior advisor for information strategy to the Secretary of Defense, and taught at National Defense University. His other books include Surprised by Beauty: A Listener’s Guide to the Recovery of Modern Music, and The Closing of the Muslim Mind: How Intellectual Suicide Created the Modern Islamist Crisis.

Critics say the founding of America was a poison pill with a time-release formula, that its principles are responsible for the country’s moral and social disintegration because they were based on the Enlightenment falsehood of radical individual autonomy.

In AMERICA ON TRIAL, Reilly declares: not guilty. To prove his case, he traces the lineage of the ideas that made the United States, and its ordered liberty, possible. These concepts were extraordinary when they first burst upon the ancient world: the Judaic oneness of God, who creates ex nihilo and imprints his image on man; the Greek rational order of the world based upon the Reason behind it; and the Christian arrival of that Reason (Logos) incarnate in Christ.

“Reilly digs down very deep into the past, down before America, down before Christ, down before philosophy, down to the revelation of the Hebrew God. … He is the ultimate source of the transcendent law available to human reason, the ‘Laws of Nature and of Nature’s God.’ Under these laws, America was formed,” said Larry P. Arnn, Ph.D., president of Hillsdale College, from the foreword.

America on Trial is available wherever all good books are sold.