Cold cereal, donuts and orange juice are breakfast staples because somebody somewhere wanted money. Breakfast in America is a corporate scam.

Not all of it. But nearly every breakfast staple — cold cereal, donuts, yogurt, bagels and cream cheese, orange juice, frappuccino — is a staple only because somebody somewhere wanted money. Wake up and smell the McCafé. 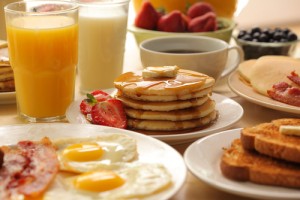 In pre-Corn Flakes America, breakfast wasn’t cold or sweet. It was hot, hearty and lardy, and it had about 4,000 calories.

“Breakfast was the biggest meal of the day. Eaten before you headed out to do a whole day of farm chores, it had to keep you going until dinner,” says food historian Andrew F. Smith, author of Eating History: Thirty Turning Points in the Making of American Cuisine. Pre-industrial Americans loaded up on protein-rich eggs, sausages, ham and American-style belly-fat bacon along with ancient carb classics: mush, pancakes, bread.

The Great Cereal Shift mirrored — and triggered — other shifts: Farm to factory. Manual to mechanical. Cowpuncher to consumer. Snake-oil superstition to science. Biggest of all was food’s transition from home-grown/home-butchered to store-bought.

“Cold cereals are an invention of vegetarians and the health-food industry, first through Kellogg’s and then through C.W. Post, which steals all of Kellogg’s ideas,” Smith explains.

“These companies realized early on that people like sugar, and kids really like sugar — so they shifted their sales target from adults concerned about health to kids who love sugar. It’s a thoroughly American invention.”

As is orange juice, another breakfast contrivance marketed as healthy for kids. Media buzz about vitamin C and advances in pasteurization spawned the orange-juice industry in the 1930s, turning an obscure luxury into a household necessity.

“Orange juice marketers have succeeded in creating an aura of golden goodness around the product. The idea that orange juice is ‘an essential part of a balanced breakfast’ is familiar and for the most part unchallenged.”

Hamilton is outraged that commercial orange juice is “advertised as pure, fresh, and additive-free. Those who buy orange juice buy the stories that the industry tells.”

Major companies use “flavor packs” engineered by the same firms that create perfumes for Dior and Calvin Klein to make their juice smell and taste “fresh” despite its long shelf life:

“Flavor packs aren’t listed as an ingredient on the label. … The formulas vary to give a brand’s trademark taste. If you’re discerning, you may have noticed Minute Maid has a candylike orange flavor. That’s largely due to the flavor pack Coca-Cola has chosen for it.”

Tropicana, meanwhile, is owned by PepsiCo.

“Ask yourself why, like most people, you drink orange juice,” Hamilton urges. “You probably say the reason is that it is good for you, or that it is high in vitamin C, or that you grew up drinking it and like it. If so, then I must frankly tell you that, when it comes to orange juice, you are acting like a robot.”

Although popular on this continent since the early 19th century, donuts were a dessert not specifically associated with breakfast until Dunkin’ Donuts popularized that notion in the 1950s.

Bagels were an ethnic niche item until Connecticut-based Lender’s established the first fully automated frozen-bagel factory in 1965. Cream cheese was not a breakfast cheese before Kraft began promoting its Philadelphia cream cheese (made in New York).

“In the 1970s, bagels and cream cheese became part of the American breakfast experience,” Smith says. “Meanwhile, chocolate milk was an invention of Nestle,” which in 1948 premiered its Nestle Quik powder, ancestor of today’s Nesquik.

Traditional elsewhere, yogurt was considered freakish in the US when General Mills began promoting it heavily as a “health food” in the early 1970s. The US yogurt industry is now worth over $4 billion a year. A single one-serving container of General Mills-owned Yoplait fruit yogurt contains 28 grams, or seven teaspoonsful, of sugar. (Health food?)

While coffee and tea have been in this country since colonial days — hence the Boston Tea Party — Smith sees them driving the latest breakfast revolution.

This one too is corporate.

“When Starbucks shifted from selling beans to selling coffee drinks in the ’80s, that created something very different in the United States.” Traveling in Italy, Starbucks founder Howard Schultz observed ordinary Italians deeply concerned about the quality and flavor of every cup of coffee they drank.

“Schultz saw that as something Americans would buy into. In fact, they did — and that set everything else in motion. Starbucks created the coffee-breakfast industry in this country. What they’re selling is an experience. That’s an incredible shift.”

Before Starbucks, “coffee in America was generic. It didn’t have to taste good. But now everybody’s talking about this special blend that just came in yesterday from Guatemala.”

They’re talking about it not just at Starbucks, Tully’s, Peet’s and Au Bon Pain. They’re talking about it at McDonald’s. Burger King sells Starbucks-owned Seattle’s Best. McDonald’s promotes its McCafé as a “unique blend of fresh espresso beans [that] results in a high-impact, full-bodied, dark-roast coffee with flavor attributes that enhance its complexity, like spicy and earthy tones and a slight caramel sweetness.” Touché.

By switching from cheap to premium coffee, fast-food chains are now rebranding themselves from fast to — well, slow; as the type of place where patrons linger sipping legit lattes, using free wi-fi and nibbling breakfast food — which is how these chains earn most of their money, Smith explains.

“The fast-food industry makes far more profit on breakfast than on anything else. In those first four or five hours of the day, they do a huge business.”

Fast-food breakfasts cost little to make: Cheap carbs, eggs and processed cheese augment meat portions that are smaller than those used in burgers — “and it’s pork, which is cheaper than beef,” Smith says. Burger King added Quaker Oatmeal to its menu in August.

A five-ounce order of Sausage McGriddles contains 420 calories and 22 grams of fat. That’s a lot, but not compared to pre-Kellogg’s breakfasts in America.

“One hundred and fifty years ago, Americans consumed two to three times more calories per day than they do now” — mostly at breakfast, Smith says. Yet obesity and diabetes weren’t at epidemic proportions “because half of Americans still lived on farms or did manual labor in cities.”

And now we don’t. We wake up, eat dessert, then sit. Breakfast in America today is disconnected from class, career, ethnicity and the functionality of bodies burning fuel. Its history is hewn of cravings, insecurities, subliminalities and false confidence conjured by strangers who tell us how to start our days, because they can.