A 12-year-old African-American boy has released a video on YouTube which depicts him demonstrating more wisdom and maturity about the issue of abortion than most adults. CJ Pearson, a 12-year-old from Georgia who previously made a name for himself calling out President Barack Obama, is now nailing Democrats on their abortion duplicity. 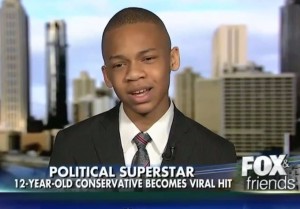 “The Democratic Party prides itself on being the party of diversity, of being the party that actually cares about black people,” he said in the video. “But do they?” He cites ways in which he thinks Democrats are racist and said none was more racist than the party’s support for legalized abortion, which has killed millions of black babies.  “You’re for African-Americans,” he said, “but you’re for the killing of our race, the annihilation of it.”

In fact, a December report from the Centers for Disease Control confirms that 78 percent of the abortions done in babies in New York City were done on babies who were black or Hispanic. In 2012, there were more black babies killed by abortion (31,328) in New York City than were born there (24,758), and the black children killed comprised 42.4% of the total number of abortions in the Big Apple, according to a report by the New York City Department of Health and Mental Hygiene.

In fact, in the top 10 states seeing the most abortions, 60 percent of the babies killed were black or Hispanic.