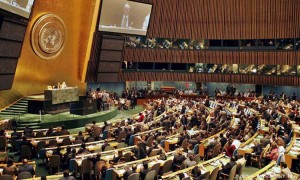 On Friday the United Nations concluded the creation of the first multilateral nuclear disarmament treaty in over 20 years, and the first treaty ever to ban all nuclear weapons. While 122 nations voted yes, the Netherlands voted no, Singapore abstained, and numerous nations didn’t show up at all.

The Netherlands, I’m told by Alice Slater, was compelled by public pressure on its parliament to show up. I don’t know what Singapore’s problem is. But the world’s nine nuclear nations, various aspiring nuclear nations, and military allies of nuclear nations boycotted.

The only nuclear country that had voted yes to begin the process of treaty-drafting now completed was North Korea. That North Korea is open to a world without nuclear weapons should be fantastic news to numerous U.S. officials and media pundits apparently suffering traumatic fear of a North Korean attack — or it would be fantastic news if the United States were not the leading advocate for expanded development, proliferation, and threat of the use of nuclear weapons. The U.S. ambassador even staged a press conference to denounce this treaty when its drafting was initiated.

Our job now, as citizens of this hapless world, is to lobby every government — including the Netherlands’ — to join and ratify the treaty. While it falls short on nuclear energy, it is a model law on nuclear weapons that sane human beings have been waiting for since the 1940s. Check it out:

Each State Party undertakes never under any circumstances to:

(c) Receive the transfer of or control over nuclear weapons or other nuclear explosive devices directly or indirectly;

(d) Use or threaten to use nuclear weapons or other nuclear explosive devices;

(e) Assist, encourage or induce, in any way, anyone to engage in any activity prohibited to a State Party under this Treaty;

(f) Seek or receive any assistance, in any way, from anyone to engage in any activity prohibited to a State Party under this Treaty;

(g) Allow any stationing, installation or deployment of any nuclear weapons or other nuclear explosive devices in its territory or at any place under its jurisdiction or control.

Of course this treaty will have to be expanded to include all nations. And the world will have to develop a respect for international law. Some nations, including North Korea and Russia and China, may be quite reluctant to give up their nuclear weapons even if the United States does so, as long as the United States maintains such enormous dominance in terms of non-nuclear military capacities and its pattern of launching aggressive wars. That’s why this treaty has to be part of a broader agenda of demilitarization and war abolition.

But this treaty is a big step in the right direction. When 122 countries declare something illegal, it is illegal on earth. That means investments in it are illegal. Complicity with it is illegal. Defense of it is shameful. Academic collaboration with it is disreputable. In other words, we have launched into a period of stigmatizing as something less than acceptable the act of preparing to annihilate all life on earth. And as we do that for nuclear war, we can build the groundwork for doing the same for all war.