16 Years Ago, We Began A “War On Terror” That Will Never End 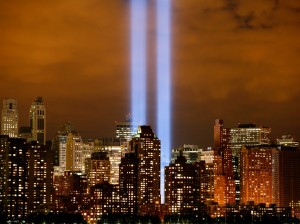 “ICH” – On the 16th anniversary of 9/11, a prescient Hunter S. Thompson column from the day after the attacks was shared on social media. Thompson wrote at ESPN on Sept. 12, 2001:

“The towers are gone now, reduced to bloody rubble, along with all hopes for Peace in Our Time, in the United States or any other country. Make no mistake about it: We are At War now — with somebody — and we will stay At War with that mysterious Enemy for the rest of our lives.”

Thompson couldn’t have been more right. More than a decade and a half since the attacks, the United States has led regime change in Iraq and Libya and is still bogged down in the longest war in American history in Afghanistan. During that time, Al-Qaeda has been diminished but remains. A group even more extreme than al-Qaeda, the Islamic State (also sometimes known as ISIS), has risen in the power vacuums created by U.S. interventions.

After 9/11, we went into Afghanistan to oust the Taliban that had been harboring Osama bin Laden. That was a clear-cut objective that had popular support in the United States and around the world. In 2003, we went into Iraq, which had nothing to do with 9/11 though the Bush Administration sold it that way. Today, that war is remembered as one of the worst foreign policy decisions in U.S. history, particularly because it had nothing to do with 9/11. The two greatest beneficiaries of that war in Iraq were Iran and ISIS. The Obama-Clinton supported toppling of Libya’s Moammar Gaddafi gave extremists an even better foothold in that country.

Before Donald Trump changed it recently, U.S. policy in Syria was inadvertently funneling weapons and aid to al-Qaeda and ISIS — an accidental yet still-perfect reminder of just how far American foreign policy has strayed from the country’s defense priorities in the days and weeks after the World Trade Center and Pentagon were attacked. 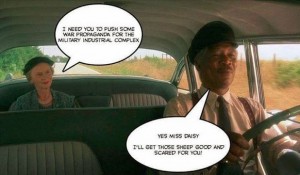 It’s maddening. You have to ask: 16 years after 9/11, who is the United States fighting against, at this point, and do those interventions have anything to do with 9/11? Even tangentially? And at what cost?

Thompson also predicted the day after 9/11, “It will be guerilla warfare on a global scale, with no front lines and no identifiable enemy… This is going to be a very expensive war, and Victory is not guaranteed.”

There was no clear U.S. victory in Iraq and there is still no end in sight in Afghanistan, and both have cost, to date, a quarter of America’s national debt.

When Donald Trump ran for president, he promised to end the “nation building,” particularly in a country like Afghanistan. He was going to be the leader who would reset America’s wandering foreign policy recklessness. Now Trump has completely flip-flopped, announcing the U.S. won’t be leaving Afghanistan anytime soon — the very definition of the nation building the president deplored as a private citizen and as a candidate.

Washington will wage its “war on terror” forever; new presidents will simply have to adjust. Barack Obama ran against George W. Bush’s regime change in Iraq only to repeat it in Libya. Donald Trump ran against the nation building of Bush and Obama and has declared he will now do his own version in Afghanistan and Syria, at his generals’ behest. 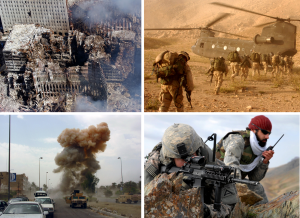 Perhaps worst of all, the terrorists won. Fear perpetuates the Forever War, in which America has been stuck since 9/11. The goals of Osama bin Laden were met.

America rightly wanted to take the battle to the terrorists after we were attacked in 2001. So, we did, or at least thought we did. But what are we doing now? Because so much of U.S. foreign policy — much of which is carried out, to this day, 16 years later, in the name of 9/11 — really has nothing to do with that awful day.

“Make no mistake about it: We are At War now — with somebody — and we will stay At War with that mysterious Enemy for the rest of our lives,” Thompson warned.

Will we be having the same discussions and observations on the 20th anniversary of 9/11? On the 50th? 100th? History tells us we might. How many generations of Americans are going to put up with this?