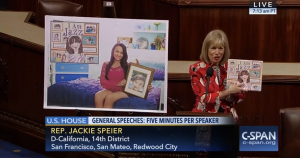 At 2 by Floor we take a look at two memorable moments from the floors of Congress.

With so many lawmakers focused on Russia and the Trump administration this week, you would think not much else was accomplished.

But Democrats did manage to focus on getting their important work done, like reading children’s books on being transgender into the congressional record.

Rep. Jackie Speier (D-Calif.) took some time to read “I Am Jazz” out loud on the House floor this week.

“Sometimes my parents let me wear my sister’s dresses around the house. but whenever we went out, I had to put on my boy clothes again. That made me mad,” Speier read from the book.

“At the beginning of the year they wanted me to use the boy’s bathroom and play on the boy’s team in gym class. But that didn’t feel normal to me at all. I was so happy when the teachers changed their minds,” Speier continued.

“But it must be done. The last time we increased the gas tax nationally was 1994,” Costa told the House.

Not raising a tax in years somehow seems offensive to Costa.

Isn’t it about time?