By RT
Some 28 Israeli aircraft recently fired around 60 air-to-surface rockets in a massive nighttime strike in Syria, according to the Russian Defense Ministry. Syrian air-defense systems managed to intercept more than half of the missiles.

A total of 70 projectiles, including 60 air-to-surface rockets and more than 10 surface-to-surface missiles, hit Iranian military targets and Syrian air-defense systems near Damascus and in the south of the country recently, the Russian military said in a statement. 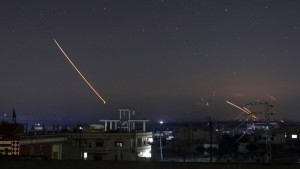 “28 Israeli F-15 and F-16 planes were involved in the attack,” the ministry said. “Syrian air-defense systems shot down more than half of the rockets as they repelled the Israeli attack.”

Israeli forces bombed the Syrian territory for two hours between 1:45am and 3:45am local time. The attack was carried out under the pretext of allegations that Iranian forces had earlier hit Israeli targets in the Golan Heights. The damage inflicted on Iranian military and Syrian civilian infrastructure by the airstrikes is being evaluated.

Earlier, the Israeli Defense Forces (IDF) said that all its aircraft had safely returned after one of its most extensive attacks in years. Tel-Aviv claims that it was carried out in retaliation to 20 rockets launched at Israeli targets in the Golan Heights by the Iranian Revolutionary Guard Corp’s Quds Force.

“Four of them were intercepted by the Iron Dome and the rest landed on Syrian territory,” the IDF said, according to Ynet, adding that the incident had resulted in no damage or casualties.

The allegations were denied by a member of the Iranian parliament’s commission, Abolfazl Hassan Beigi, who accused Israel of “lying,” as Iran has “no military presence” or bases in Syria, Sputnik reports.