As the “man after God’s own heart,” David is an easy choice when we’re looking for someone to emulate in our walk with God. But even a quick reading of the text on David’s life will show that he wasn’t exactly perfect. Rather, David was a man who made some terrible choices. However, oddly enough some of the strongest lessons about what it means to have the heart that God wants us to have come from the times when David gave in to sin.

In 2 Samuel 11, we learn of David’s series of sins with Bathsheba and her husband Uriah. That sets up 2 Samuel 12, where Nathan the prophet comes to David to uncover the sins and give the message from God. In Psalm 51, we find David’s prayer of repentance to God for those sins. In these two chapters we learn a number of great lessons about how to respond to sin. Let’s take a look at three of those lessons. 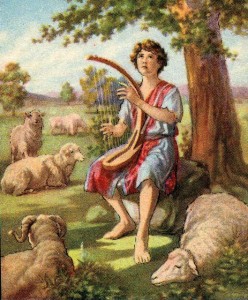 David Playing the Lyre as He Watches His Sheep I Samuel 16:11

David hated sin. When Nathan presented David with the story of the rich man who stole the poor man’s sheep, “David’s anger burned greatly against the man” (2 Sam. 12:5). David hated the injustice and wanted to make it right. What followed is the most important lesson for us to learn in our attitude toward sin. See, as soon as David became so indignant, Nathan revealed to him that he was the man guilty of such a great crime. David didn’t lie. David didn’t make excuses. David didn’t try to diminish his own sins by comparing them to someone else’s. David immediately owned it, saying “I have sinned against the Lord” (2 Sam. 12:13). By the time he penned Psalm 51, we see that that hatred for his own sin remained, as he said it was “ever before him” (51:3) and he begged to be delivered from his own “bloodguiltiness” (51:14).

We would do well to learn from his hatred for sin. It’s so easy to spend our time talking about the sins of the people of the world and what we need to do to change them, but unless we truly hate our own sins, we’re just being hypocritical. David’s sharing of God’s hatred for sin is surely one of the reasons why he was known as a man after God’s own heart, and it should be our goal to fit that description as well.

David accepted God’s forgiveness. It’s very easy for us to base our state of forgiveness on our own feelings, but that only leads to a misunderstanding of holiness and grace. On the one hand, you have those who decide that they can let themselves off the hook for the sins they’ve committed, that their sins aren’t a big deal. Of course, that’s no way to look at the ugliness of sin. Only God can give forgiveness. On the other hand, though, you have those who beat themselves up over their sins, refusing to accept God’s forgiveness. That doesn’t make us more righteous – that just means we believe we’re higher, more righteous judges than God. When He promises forgiveness, we have to believe Him that He’s forgiven us and will remember it no more. When David said “Wash me, and I will be whiter than snow” in Psalm 51:7, he acknowledged this great promise, that even after adultery and murder, God can cleanse every stain and restore us again. David allowed himself fellowship with God once again, not on his own merit, but on the belief that God’s grace was enough. And that’s the heart our Father wants us to have. Once we accept forgiveness on God’s terms, we can stop trying to determine it for ourselves.

David turned from his sin. Once the sin was committed, the admission was made, and the punishment was revealed, David accepted God’s punishment (2 Samuel 12:22-23). Though he prayed fervently to change God’s mind, once his prayers weren’t answered, David acknowledged that the matter was done, and he went on. He then prayed in Psalm 51 that he would be restored with a steadfast spirit (51:10) so that he would be able to sing of God’s righteousness (51:14), declare God’s praise (51:15), and teach others to avoid sin (51:13).

When we find ourselves in sin, we need to go through the grieving and acceptance of forgiveness that David went through, but afterwards we need to make sure to go on our way doing right. It’s about running to something good rather than just running away from the bad. God restores us not just so we can avoid the ultimate punishment of our sin, but so that we can find our joy in Him.

Some of the things I’m most thankful God put in the Bible are the stories of faithful people who stumbled. It’s in seeing their weaknesses that we learn that even great people of faith weren’t perfect, but God is faithful to forgive anyway when He sees a broken and contrite heart. Let’s strive to emulate David’s attitude toward sin found in these great chapters.

Are you like David… a person who stumbles? The bible says; Come unto me, all [ye] that labour and are heavy laden, and I will give you rest. Mat 11:28 That if thou shalt confess with thy mouth the Lord Jesus, and shalt believe in thine heart that God hath raised him from the dead, thou shalt be saved. Romans 10:9 Only believe and you will be saved. Say a simple prayer something like this:

Jesus, please forgive me. I know I haven’t done everything that I should in my life and I regret it. I know that you died for me and that you have a plan for my life. Please teach me your ways and help me to live my life for you, free from the fears of this world and the next. I want to be ready for eternity with you. Amen