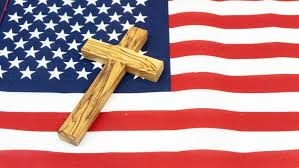 I’ve long been imploring fellow believers to become active in politics and government, but I’ve not fully grasped the scope of what we must do. Until now.

After the 2020 elections exposed how corrupt our nation has become, I increased my calls to action, focusing primarily on Christians taking control of positions of authority that protect election integrity. It is not enough that we vote. We must do much more to fight against the principalities and powers (Ephesians 6:12) that are using government to destroy us, our families, our churches, and our nation. Although I’ve been focused on taking over election posts, Congress and the White House, the Holy Spirit has recently impressed upon me that we must take over every part of government. To do this, we need nearly 100 million voters and tens of millions of Christians willing to work full-time in the public sector.

So while “walking the track” (prison lingo for having a semi-private conversation in Outside Rec) with my Christian brothers, Eric and Tyler, I asked each of them this question: “What would the DMV be like if it were run by, and entirely staffed by, Christians who love God and others as Christ has commanded?” 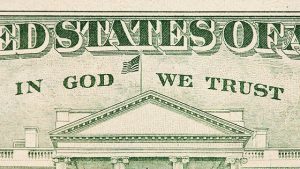 After some laughter died down, I doubled down, asking, “Shouldn’t our elders and deacons be in charge of every state’s Department of Motor Vehicles? Shouldn’t our choir members and Sunday School teachers be working the DMV counters?”

We discussed my underlying point after I clarified that I was speaking of every agency in all of government: local, state, and federal–of the twenty or thirty million public sector jobs that include every position of power and authority in our country. After all, Romans 13 states that public sector employees and officials are “God’s ministers for good.” In 1 Timothy 2:1-4, we’re told to pray for “kings and all those in authority” so that we may live peaceably because God wants all men to be saved. So why aren’t we taking these jobs? Why aren’t believers holding most if not all of the public sector positions? Would we not do a better job in these positions than those who reject God, His Spirit, and His Word? Would we not be able to better advance His Kingdom if we controlled our federal, state, and local governments?

While we still have a Constitution that allows for it, we must run for federal office, take control of Congress, and impeach every federal judge (indeed, the Constitution does not give them “lifetime” appointments; and legislating from the bench certainly does not qualify as “good behavior”). If Christians control Congress and the White House, we can repeal the civil service laws so that we can terminate up to the entirety of the federal workforce, especially those entrenched bureaucrats who are running this country into the ground. We would have the ability to fill the 5 million plus federal jobs with Godly men and women.

Doing the same at the state and local level is not only possible, it is not near as difficult to do. Most cities of one million or less are controlled by a mere handful of people. In most of these cities, as little as a few hundred Christians should be able to take over both of the Republican and Democrat local party chapters. This is the first step to controlling who is nominated for elected offices (for if the ungodly select our nominees, we don’t have much of a choice, do we?), local, state, and federal. We begin winning complete control at the local level. Controlling local politics and government gives us the power to take over state governments. Running states gives us the ability to run the nation. 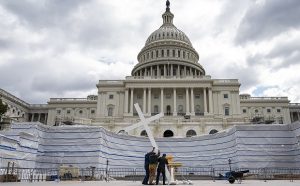 All of us should know by now that electing a single person as President of the United States is not enough. We must by now have realized that a few dozen good people in Congress is not enough. Surely, we understand that a Supreme Court Justice or two is not enough. After all, there is currently a “conservative supermajority” on the Court, but for what?

James 4:17 tells us that it is sin to know the good that should be done and not do it.

The Bible teaches us that God intends us to be in power, to take dominion over the entire planet (Genesis 1:26-27). In Acts 17:26, it reads: “From one man He made every nation of men, that they should inherit the whole earth, and He determined the times set for them and the exact places where they should live … so that men would seek Him ….”

In the Old Testament, we see that God used Moses, Joshua, Samuel, David, Solomon, and others, to fulfill his promise to Abraham in Genesis 12 that He would “Make you into a great nation … that all nations through you will be blessed.” We see that God used Joseph, Daniel, Shadrach, Meshach, Abednego, Nehemiah, and others, to serve in positions of power in governments other than Israel’s.

In the New Testament, we see that God called the government tax collector, Matthew, away from his job in Matthew 9, but that he didn’t ask Zacchaeus to leave his position as chief tax collector. Nor were these men told to leave government service after their conversion to Christ: the Ethiopian eunuch, Queen Candace’s treasurer (Acts 8); Cornelius the Roman centurion (Acts 10); the Phillippian jailer (Acts 16), and Erastus, the Director of Public Works (Chamberlain) for the City of Rome (Romans 16). Jesus told the Father, “… my prayer is not that you take [my disciples] out of the world ….” (John 17:15).

It is also incontrovertible that God is concerned with the details of civil government. A cursory reading of Exodus, Leviticus, Numbers, and Deuteronomy gives us much to think about regarding legislation, law enforcement, and justice. The vast majority of civil law today can be traced back to the Ten Commandments of Exodus 20. It was God, through Samuel, who first instituted representative government (in response to the people crying out for a king to rule over them). So why has the Church abandoned the work of government, giving it to the worst of our denizens? Why are we allowing evil men and women to rule over us?

I’ve heard, “Politics is too dirty!” I agree. It can be nasty, ugly, and worse. Most of us like our jobs. The last thing we want to do is work in government, especially if it means running for office. But didn’t Jesus Christ endure so much more for us, for our salvation?

I’ve heard, “The Constitution requires separation of church and state!” It does not. It simply prohibits a government sanctioned and funded religion like Great Britain’s Church of England, while requiring that “Congress shall make no law … prohibiting the free exercise [of religion].” We have much work to do in this area alone, in restoring our Constitutional right to the free exercise of our faith……

Perhaps, in their avoidance of government service, Christians have been relying on scriptures like Hebrews 11:13, 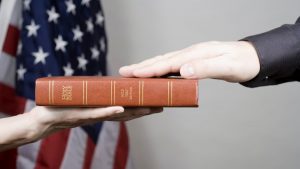 John 15:19 and Romans 12:2, passages that remind us that we are aliens, strangers, pilgrims here, just passing through. We are not of this world, right? But we are also told to be forceful in advancing the Kingdom of God (Matthew 11:12). Are we not to overcome the world (1 John 5:4)? For after Hebrews 11:13, we read in verses 29-34 that God was behind Moses’ victory over Egypt, Joshua’s victory over Jericho, and the victories of Gideon, Barak, Samson, Jephthah, David, Samuel, and the prophets (like Daniel), who “through faith subdued kingdoms, wrought righteousness, obtained promises, stopped the mouths of lions, quenched the violence of fire, escaped the edge of the sword, out of weakness were made strong, waxed valiant in fight, turned to fight the armies of the aliens.” Does this sound like the Church is supposed to stay out of politics and government? Did Christ abolish the law and the prophets? In fulfilling prophesies, He changed much, but did he overturn the Dominion Mandate of Genesis 1:26-27? No, He did not. See Acts 17:26.

My Christian brothers, Eric and Tyler, agree with me that the Church has long abdicated its responsibility to raise up leaders for government service (at every level). Eric said, “How can we run this country? We can’t even run our churches properly.” Tyler added, “We must focus on discipleship. Our Body is weak, and the Church has not been doing the hard work of building up mature Christians, fully equipped to advance the Kingdom of God, especially in this manner.” On these matters, the three of us agree, and we spoke of the importance of the Church training up men and women in matters of self-government, family government, church government, and civil government–in equal measures, with purpose, and passion.

To that end, we have committed to doing what we can while incarcerated. First, we plan to identify people we know

who are committed to Christ and willing to work in government. This includes men serving prison time with us who will plan to do so upon their release. Although, generally, felons aren’t allowed to vote, we are allowed to run for elected office; and we are not excluded from all government jobs. There are those with felony records who have won elections, including one elected to serve as a county sheriff even though under federal law he was not allowed to possess a firearm. Secondly, we plan to disciple them, doing our best to prepare them for the road ahead. As a former business lawyer, I have much to offer. Not only do I have a wealth of education and experience in the law, I earned a bachelor’s degree in political science while active in state and national politics. As a former pastor, Eric is helping me understand how we can reach church leaders with this message. As a prime candidate for working in government service, Tyler is our first guinea pig.

What we are doing inside a federal prison in Ashland, Kentucky, we hope you will begin doing at home, in your church, and in your community. With the power of the Internet and social media platforms, we can reach every eligible voter in the U.S. We can message every Christian in every corner of this nation: “Help us! We need 100 million voters. We need 30 million people to fill 30 million government jobs. Don’t let the slackers, the corrupt, the bullies, the greedy, the evil-doers run this country!”

Our first responsibility is to preach the gospel, making disciples of all nations. But by what means? Through traditional evangelism, yes. We will not cease witnessing, preaching repentance in the manner that we have for 2000 years. But what if the Church also used the DMV offices across this nation as platforms for reaching the lost with the love of Christ? What then? What if the Church ran the government offices of social services, business licensing, zoning, permits and inspections, and utilities? What if we dominated our police forces, and those of other first responders? What if we ran our school districts, our cities, our states, Washington, D.C.? What then? 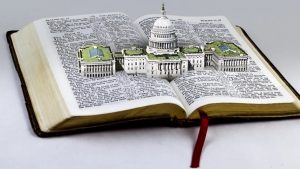 Would we do a better job running the country than self-centered, anti-Christian, secularists? If we did a great job, solving all of the problems that government can and should solve, how would that help advance the Kingdom of God? Once we occupied most, if not all, of the positions of authority and power in this country, would we not glorify God through our work? Would we exemplify humility? Would we honor Him in all we say and do? What then? Through our public service, would we advance the Kingdom of God better than we are doing so now? I think, yes.