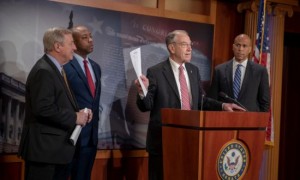 [CharismaNews.com] The Senate passed the First Step Act a week before Christmas with an overwhelming majority, 87-12.

The prison-reform bill would ease the way for some prisoners to win early release to halfway houses or home confinement, according to Reuters, and aims to establish programs to head off repeat offenders and protect first-time non-violent offenders from harsh mandatory minimum sentences.

“It’s something that’s so important to the faith community. I believe the heart of the First Step Act is redemption. It’s actually an opportunity to give nonviolent prisoners a chance to rebuild their lives. If they, through years of good record and contributing and taking care of their families, do right, then they can actually have the word ‘felon’ taken off their permanent record. They’ll be able to get better jobs and build their families for generations with blessing instead of the curse of having that word,” Jentezen Franklin previously told Charisma.

Major faith leaders, including key Pentecostal preachers, advocated for the legislation and praised the vote as a groundbreaking step forward that can advance the Kingdom of God. Here’s what a few are saying:

“This entire effort originated at Jared and Ivanka’s table during a dinner for evangelicals in the White House on the eve of the National Day of Prayer in 2017. Sitting just one seat over, I will never forget listening to Rev. Samuel Rodriguez and Jared Kushner discussing their shared passion to reform America’s prisons. What began with the evangelical community became one of the single greatest moments of bipartisan unity in the last 30 years. It wouldn’t have happened without our community, brave Democrats (like Van Jones) who would stand with the administration for justice and—most of all—the tireless and brilliant work of Jared Kushner, who brought us and held us together.”

“We applaud the Senate for taking a bold step for federal criminal justice reform by passing the First Step Act. This legislation will help reduce recidivism by preparing men and women to fulfill their God-given potential through restorative programming, including improved substance-abuse treatment programs, life-skills classes, and vocational training—building job readiness to fuel local economies. This is about getting smart on crime by giving men and women, made in the image of God, the tools to change their lives.”

America is the greatest Country in the world and my job is to fight for ALL citizens, even those who have made mistakes. Congratulations to the Senate on the bi-partisan passing of a historic Criminal Justice Reform Bill….

Thank you, United States Senate. The #FirstStepAct has been a long time in the making, and it is a good and needed development.