A ‘Little Boy’ Who Has Faith Like a Mustard Seed 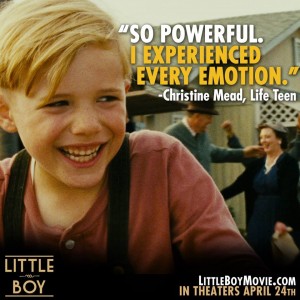 Little Boy is a powerful and moving, utterly unique story that will capture your heart and lift your spirits. In my opinion, it is a major motion picture masterpiece that tells the heartwarming story of a Little Boy who is willing to do whatever it takes to bring his dad home alive from World War II.

The story reveals the indescribable love a little boy has for his father and the love a father has for his son. Set in the 40’s, Little Boy is a cinematic classic that captures the wonder of life through the eyes of a young little boy.

I recently caught up with two of the stars of the movie, Mexican-born Eduardo Verástegui and Jakob Salvati, who ironically was born the mountain town of Wrightwood, California, and plays the “Little Boy,” and who is in real life, the son of a Southern California pastor, at NRB 2015, held at the Gaylord Opryland Hotel in Nashville, Tennessee.

Eduardo, who is a producer of the film and also plays a priest, Father Crispin, in it, began by saying that is character “sends a powerful message to little boy.”

He went on to say, “In the movie, when I’m giving a homily to the whole town, I say, ‘If you have the faith the size of a mustard seed you can move a mountain,’ and that’s what the whole movie is about.”

Then Jakob Salvati, who is also known for his roles in “Escape from Tomorrow (2013), and “Red Widow” (2013), explained how faith plays a powerful role in the story.

Eduardo Verástegui told me that the story is set in a little town where the Busbee family, James and Emma are the parents and they have two sons, London and Jakob. “Actually Jakob plays Pepper Busbee, his little boy,” he said.

It was filmed in Rosarito Beach, a coastal resort city in the Mexican state of Baja California located approximately 10 miles south of the U.S. border, in the studios where “Titanic” was shot many years ago.

I asked Eduardo how the story came about, and he replied, “Alejandro Monteverde and Pepe Portillo, the writer, got together and wrote the story just from nothing. They were thinking about telling a fairytale for adults about a little boy whose 8-years-old who has no friends because he’s very short, and they call him midget and treat him really bad.

“But he’s fine because he has one friend, his best friend, his father. He loves his dad so much, but the problem is that this family has a tradition that, in times of war, a member of the family has to go and fight for country. So the worst day of little boy’s life is when the military boss comes to town to take all the soldiers including his own dad to fight against the Japanese. And the movie starts right there.

“As the story unfolds, this little boy is willing to do whatever it takes to end World War II so he can bring his father back home alive. This movie will touch your heart, will make you cry will make you laugh, will make you think about important things in your life and hopefully when you leave the theater you will leave inspired to love more and judge less forgive more and complain less and you will leave with a candle in your heart. That’s our hope as filmmakers.”

Jakob Salvati then talked about the other priest in the film, Father Oliver, played by British actor, Tom Wilkinson, saying, “He gave me a list that will bring up my faith as I believe that having faith as a mustard seed can bring my dad home. So I try everything in my power to get that list done. One of the things on the list was to befriend Hashimoto who has the enemy’s face, but he’s not really the enemy.”

Eduardo then cut in, “Because we are in World War II, Hashimoto was the only Japanese in town and everyone hated him, including ‘Little Boy’ because he thinks he’s the reason why his dad is in World War II fighting against Japanese. But then the priest tells him, ‘Your faith cannot work if you have hatred in your heart. So you have to become his friend.’ In other words, ‘If you want to be perfect, love your enemy and a part of the list is just that — loving your enemy.’

“There were other items on that list such as feed the hungry, visit those who are in prison, visit the sick, shelter the homeless, and many others, and by doing this list it’s changing the heart of the entire town including the heart of Hashimoto, who was the enemy, but then they turn out to be best friends.”

Jakob then explained how his character first approached the Japanese man. “I came to him with a soda as a peace treaty, but he just threw it in the trash,” he said. “So I tried again and it didn’t work, so then I went to ask him for help in doing my list and he was cutting fish at that time, so he opened the door and let me in and that’s where we truly became friends and he read a story to me.” 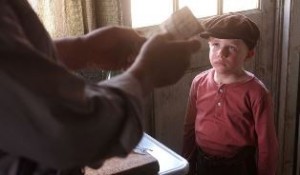 I then asked Jakob what it was like to see himself up on the Big Screen, and he said, “It’s pretty breath taking, because not many kids can do that and I know none of it would have happened without God so He’s the one to thank.”

What was it like to work with Tom Wilkinson? “It was actually very interesting, although he was very serious about his work, he was a very nice person when he wasn’t acting,” he told me.

Did he help you with your role?  “Yes very much, because I looked up to him,” added Jakob. “I saw how he did his role so naturally and I thought that maybe I can do it that way too.”

I then asked Eduardo about Tom Wilkinson, and he described him as “amazing,” and said, “I don’t even know how to describe him and Emily Watson, who is also in the movie, as they were like a gift from God.”

I asked Jakob what he would like people to take away from the movie, and he replied, “I’d like them to be leaving the movie thinking about what Pepper [his character] did and try to be more like Pepper and do things like he would, but in their own version. Like feeding the hungry, or clothing the naked. I mean, it’s just a blessing to be in this movie and for them to be interested in it enough to come to see it and I hope that they just take it everywhere they go.”

I concluded by asking both of them what they hope to do in the future, and Jakob Salvati, began by saying, “I plan to be an actor and spread God’s word through acting and also a preacher on the set. Maybe also a dancer and a singer as well.”

And what about you Eduardo?  “Well, I want to just keep producing films that I just love and I’m thankful to be able to work on something that I’m passionate and love that is bigger than myself, something that has potential to reach many people around the world.”

The film goes out on general release on April 24th in more than 1,000 theaters in the United States and for those who want to see the trailer or learn more about the movie just go to their website — http://littleboymovie.com/.