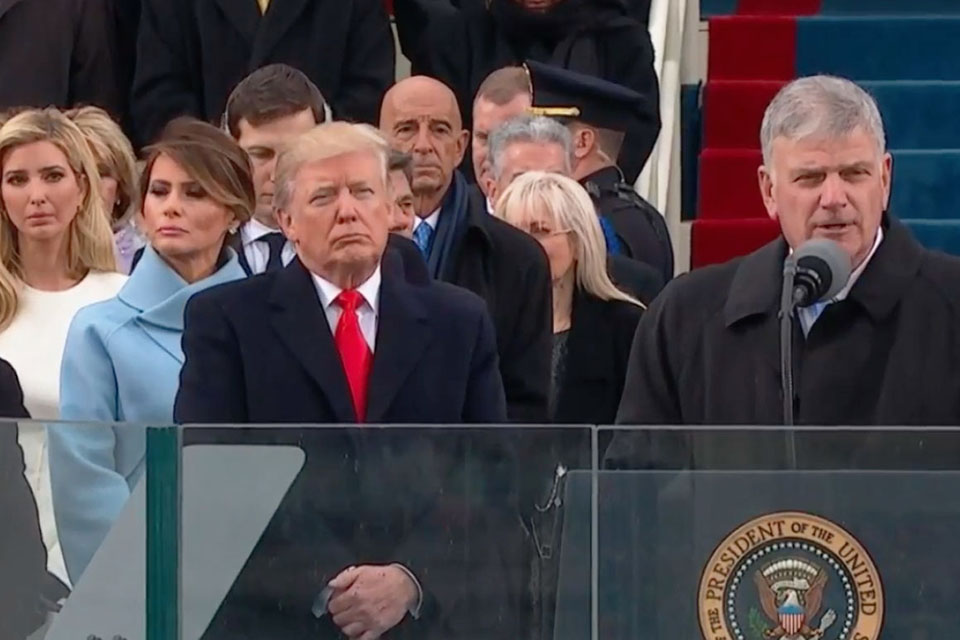 It was one of those magical moments that you will never forget. The inauguration of Donald Trump was being watched live by tens of millions of people all over the world, and it was at that precise moment that God gave all of us another little reminder that He is in control. It had not been raining prior to the time that Trump stepped up to the Inauguration platform, but when he did, the rain began to fall. Considering everything else that was going on at the time, it would have been really easy to miss that little detail, but fortunately there was someone there that perfectly understood what was happening.

When Rev. Franklin Graham came to the platform later on to deliver his portion of the benediction, it was perhaps the most electrifying moment of the entire event. Before reading the passage of Scripture that he had chosen, this is what Graham told the crowd…

“Mr. President, in the Bible, rain is a sign of God’s blessing. And it started to rain, Mr. President, when you came to the platform. It’s my prayer that God will bless you, your family, your administration, and may He bless America.”

And Graham was exactly correct about this. All throughout the Bible, rain is an indication of the blessing of God. For example, in Leviticus 26:3-10 the people of Israel were told that rain would be one of the primary blessings that they would receive if they kept God’s commandments…

3 If you walk in My statutes and keep My commandments and do them, 4 then I will give you rain in due season, and the land shall yield its increase, and the trees of the field shall yield their fruit. 5 Your threshing shall last till the grape harvest, and the grape harvest shall last till the time for sowing, and you shall eat your bread till you are full and dwell in your land safely.

6 I will give peace in the land, and you shall lie down for sleep, and none shall make you afraid; I will remove harmful beasts from the land, and the sword shall not go through your land. 7 You shall chase your enemies, and they shall fall before you by the sword. 8 Five of you shall chase a hundred, and a hundred of you shall put ten thousand to flight, and your enemies shall fall before you by the sword.

9 I will turn toward you and make you fruitful and multiply you, and I will confirm My covenant with you. 10 You shall eat the old harvest long stored, and clear out the old to make way for the new.

Alternatively, in Deuteronomy 11:16-17 the people of Israel were warned that if they turn away from the one true God and worship other gods that the Lord would withhold rain from them…

16 Take heed to yourselves that your heart be not deceived, and you turn away and serve other gods and worship them. 17 Then the Lord’s wrath will be inflamed against you, and He will shut up the heavens so that there will be no rain and the land will not yield its fruit, and you will quickly perish from the good land which the Lord is giving you.

Now that he is the president, Donald Trump will have some very hard choices to make. Let us hope that he follows the one true God that created all things and makes decisions that are in line with His commandments and His statutes.

And considering what we just looked at in Deuteronomy 11, it does alarm me that a Hindu priest and a Muslim imam took part in the Inaugural Prayer Service. That should not have happened.

The Bible is very clear – if we love the one true God and keep His commandments, we will be blessed. As a nation, that is the path that we should take. Unfortunately, there are always people that are trying to pull us away from that path.

That verse was 2 Chronicles 7:14, and the verse immediately before that one talks about God withholding rain because of the wickedness of the people. Is that an absolutely amazing “coincidence” or what? This is what 2 Chronicles 7:13-14 says in the Modern English Version…

13 “When I shut up the heaven and there is no rain, or when I command the locusts to devour the land, or send pestilence on My people, 14 if My people, who are called by My name, will humble themselves and pray, and seek My face and turn from their wicked ways, then I will hear from heaven, and will forgive their sin and will heal their land.

Right after Pence was sworn in with his hand on these verses, Donald Trump stepped on to the platform to be inaugurated and the rain started to fall.

Could it be possible that God has given us this prophetic sign to show us that He is ready to forgive our national sins and heal our land if we will just turn to Him?

As I have been documenting on The Most Important News, there is so much about Trump that appears to be prophetic.

Saturday was Trump’s first full day as president, and on that exact day he was 70 years, 7 months and 7 days old. Is that just another “coincidence”? And we just happen to be in year 5777 on the Hebrew calendar. For many more “sevens” that connect Donald Trump, Israel and the year 2017, please see this article.

I believe that Donald Trump has some very important things that he is supposed to do, but of course the enemy will constantly be trying to steal that destiny from him. And Donald Trump is going to be facing an internal battle as well. Washington D.C. has a way of changing people, and there will be constant pressure to turn from the straight and narrow path.

So let us pray for him and for all of our leaders, and let us also pray that our entire country will turn back to God so that a season of restoration can begin.